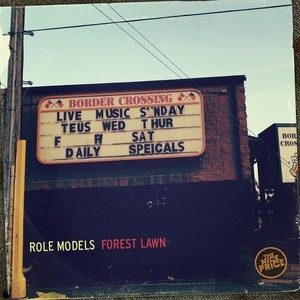 Forest Lawn is the sophomore album from Roles Models, the alternative Punk / Rock band led by a certain Rich Rags.
The album picks up pretty much where their debut album, 2015's The Go To Guy, left off, with more sleek punk tinged rock n roll. The songs are slick and well constructed, the band as tight as a ducks arse, so to speak, and the production is just sweet.  After a quick one two three punch of Radio, Disappointing You and Got No Time, the band slow the tempo sown a little for Bullshit Corner which turns out to be a rather touching ballad, despite its title! The pace picks up again with Wanted To Be Wanted, which turns out to be a great melodic rocker of a track. Goodbye and Hooray and a bit more bite to it, whilst the band return to their melodic rock formula with The Ditch. In fact in many places Forest Lawn reminds me a lot of Soul Asylum, which is no bad thing in my opinion.
Sleep Tight is a more raucous affair, whilst the tempo slows again for The Lights On Your Road.
I Ain't Lucky is a short and sweet track that has a real rock n roll feel to it. Penultimate track, No Shame is another slice of melodic rock genius, whilst album closer Guest List, is the albums big ballad. A great way to close a very solid album!

Well Worth Checking Out

Posted by The Sinister Angels realm at 23:03