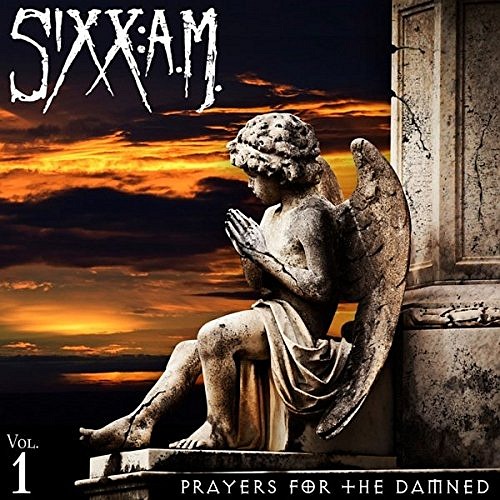 
Again this album has been out about a month or so, but again what an album it is. Now Sixx:A.M. are a strange beast for me. I found their debut, The Heroine Diaries to be okay, a few really good tracks but nothing that really held my attention. Then we had the acoustic mini album 7, which I thought was amazing. That was followed by the album that really did catch my attention, This Is Gonna Hurt, an album that really blew me away. But I then found its follow up, Modern Vintage, once again didn't really ,match up to its predecessor and struggled to hold my attention. Therefore I felt a little trepidation as I faced listening to the bands latest offering, Prayers For The Damned Vol.1, But I needn't have worried, its a cracking album, and quite possibly the most rounded and fulfilling album that the band have released to date!
Prayers For The Damned Vol.1 represents the band most complete and ambitious work. They have been together for seven years and the sound gets tighter and tighter, with the album including some of the heavier songs this band ever released, musically and lyrically, but also darn catchy rocking melodies.
There simply is not a bad track on this album! The opener "Rise", also chosen to be the first single, is an ultra cool rocker with a heavy guitar riff and a murderous groove.  The title song is a mid pace one, a tune with a kind of a sad vibe, "Belly of the Beast" has nothing to do with the Anthrax song, having the same title. Instead of, Sixx:A.M. create a song that belongs to the craziest ones on this long player. It is a dark creepy number, that is simply brilliant. "Better Man" isn't really the ballad you might expect, instead a great rocker built upon the acoustic guitars, seriously this song is huge!
"Everything Went to Hell" a mighty  rocker of a track built around a great riff. The final song on the album "The Rise of the Melancholy Empire" is an anthem of defiance, of overcoming adversity, saying ‘fuck you’ and with a promise to return.

Prayers For The Damned Vol.1 is the best album Sixx:A.M. have produced to date and very, very highly recommended!


Posted by The Sinister Angels realm at 10:18