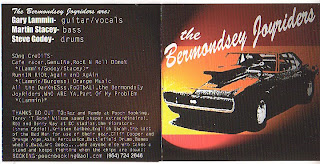 The Bermondsey Joyriders hail from where else other than Bermondsey, they play a simple blend of punk, blues and rock. Keith Boyce has played with some of rocks biggest and greatest names including ROD STEWART and ELTON JOHN and LONG JOHN BALDRY and now joins forces with MARTY STACEY from UK punk legends CHELSEA and GARY LAMMIN formerly of COCK SPARRER to complete THE BERMONDSEY JOYRIDERS.
Keith Boyce describes The Bermondsey Joyriders as a power house rock n
roll trio playing music not too unlike IGGY POP or THE NEW YORK DOLLS.
Infact when PATTI PALLADIN one time musical calobarotor and Ex
girlfriend of New York Dolls guitarist JOHNNY THUNDERS first heard The
Bermondsey Joyriders she said that The Bermondsey Joyriders had
captured the spirit of 1970s street Rock n Roll perfectly, and to be honest I have to agree. There's no overblown productions here, just simple music played from the heart.
Stand out tracks include, All The Darkness, Runnin Riot and Who Are Ya.
Highly recommended for music fans who like their punk simple with a tint of the blues thrown in for good measure!