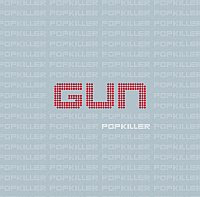 One thing that you had to ponder when news of Guns return broke was that with Toby Jepson on board, were Gun going to sound like the Little Angels? Now the Little Angels were a damn fine band, one of my personal favourites through the Early nineties, but Gun always held a different kind of sound, which was loved too. Popkiller manages to ease those fears, yes Toby brings in his own personal style, some of those big hooks that his previous band were famous for, but the Ep maintains all of the little quirks that made previous Gun releases so poptasticly enjoyable.
Let Your Hair Down opens up the album and is catchy tune that quickly gets your attention.
Next up is Seraphina, which starts with a nice guitar intro and it progresses at a nice click until the nice guitar instrumental in the middle of the track which then sets the song up for the ending.
Popkiller must be a little ironic as its opening few seconds really bring to mind Pulps 'Common People', before the song grows into a nice little rocker!

Ripping Up The Letters is a track more or less in the mould of many of the Little Angels ballads which I do like and The Only is then a strong track that finishes up the EP.

This short five track ep is a great start for the band, with Toby Jepson fitting effortlessly into the Gun mould, and I personally can not wait to hear a full length album from the guys!