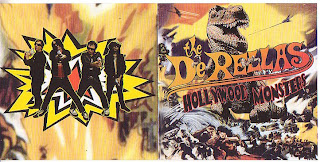 The DeRellas bring us Hollywood Monsters, their debut album. The best way to describe their sound is simply no nonsense glam tinged punk rock n roll.
Hollywood Monsters packs all the energy, excitement and impact of the live show, and indeed sounds as if it could be a lost classic from 1978. Standout tracks for me are the explosive 'She's a Pistol', the incendiary 'All Fired Up' (whose sound suggests that the band would do well gigging with The Towers of London), the highly pertinent 'Freakshow' and the glam-punk re-working of Carly Simon's 'You're So Vain'
great old fashioned punk pop rock n roll which reminds me of latter day Ramones.
A great album!