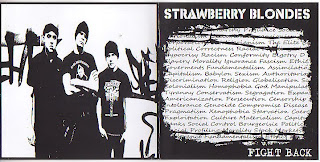 Newport Punks, Strawberry Blonde's return with their second full length alum in the form of Fight Back. The album gets off to a bold and blistering start with the double bill of ‘Revolution Radio’ and ‘Fight Back’; bold because the same central riff is on both tracks and blistering because that particular riff is the kind that pummels its way into your head from the first note and dosn't’t leave until long after the last song has finished. 'No Way Out’ contains the only other discernibly brilliant riff of the album with lead singer Mickie Stabbs’ vocals perfectly fitting the powerful chorus as he sneers “no future, no fun / keep fighting but there’s no way out”. ‘RCH Punx’ repeats the trick of the first two tracks by containing the same central riff as ‘No Way Out’. The rest of the album unfortunately fails to match these tracks in quality which is unfortunate really. The other problem is the fact that the riff are so often re used or shared between songs it kind of leaves a repetitive taste in the mouth with the album coming across as a little samey. There are some great songs on Fight Back, don't get me wrong, I just believe it needed a little more time!