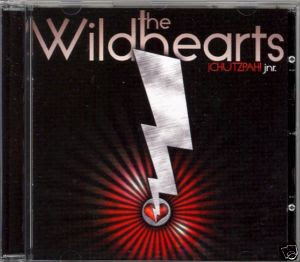 The Wildhearts make available the tracks that didn't make it onto the mighty Chutzpah! album released earlier this year. Many Die hards would have all ready heard 5 of the eight tracks as they were made available via free downloads or on the Japanese release of the Chutzpah album.
Opener and title track, Chutzpah Jnr, is a blistering fun introduction, lasting a little over a minute long. Next up is The Snake, The Lion, The Monkey and The Spider, which was originally made available as a free download taster prior to the albums release, its a quirky little number, the Wildhearts at their best!
Then we get All That Zen, which has to be one of the most uplifting and positive tunes Ginger and the boys have ever put out, pure genius!
Next up is Vernix, a truly mixed up song that has everything, its as heavy as Satan's bum in places, melodic as an angel singing in others, the tempo changes are quick and fast, and Gingers sense of humour is all over the bugger! A great song, but people unfamiliar with the band may not get this one, but I bloody love it!
Then we get the controversial dance track, Under The Waves, hmm well............. I'm loving this song, and its not a dance track to me. Sure there's drum machines in there and there is a techno vibe in there but its still the Wildhearts through and through and a lot less extreme than anything they put out in the Endless Nameless era.
Some Days Just Fucking Suck follows with a vibe familiar to any Wildhearts / Ginger tune, and a sentiment that we all know all to well. Its got a great chorus and could be fun live, another song that Ive fallen instantly in love with!
Then we get People Who Died, which sees Scott Sorry take on the lead vocals, its a great punk track with Scott putting a great performance on the lead vocals. Finally closing this short mini album is Zen Requiem, a track in memory of Gingers close friend Danny Zeen. A great song that was originally debuted live a few years ago.

Chutzpah Jnr is only available from the live shows at the moment, but I strongly urge any die hard fans to check it out, there's some great songs on here, but i can see why they were left off of the main album, I just don't see where they would have fitted in on the track listing.

A great early Christmas present though, God bless The Wildhearts!!!!