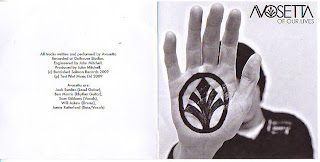 From the first opening bars of track one (Of Our Lives), Avosetta not only set the mood for latter tracks on this EP, but also set a standard for how music should sound in this current climate. They ooze worldwide potential with every wild guitar riff, spiralling through thunderous drum passages, all complimented with stunning vocal performances. 'Of Our Lives,' the debut EP from Norwich-based five piece Avosetta is one of those frustrating releases where each song has so many good points, but for some reason they just never quite come together right if you know what I mean.


Some times it can be just that the band try to through in a little too many tempo and time changes, but they just don't get the interchanging piece's quite right as on title track 'Of Our Lives'. Its a pity really as the song boast some great guitar lines, and for the most part settles in to a great heavy rock groove which is spoilt by the tempo changes and genre mixes as the band try to mix in some emo punk sections, but as i said they just don't quite pull it off.

It does get better, the last two tracks on this ep, 'Syncopated Heartbeat' and 'Warship Lanterns', are much stronger, especially the closing track 'Warship Lanterns' with its melodic meandering which is spiked with dewy falsetto vocals; the second half of the song is a swaggery, more rock-orientated section, and this time the band pull off the tempo changes perfectly!

This debut EP from the Norwich based quintet, showcases four songs that between them, boast many fine moments, from a band that just ooze potential, maybe if they could get the help of a good producer just to help them refine their ideas a little more then this ep would be getting top marks.

Check em out, they're on their way to World Wide Stardom, they're young talented and ambitious, and as Ive already said the songs are brimming with great ideas!