Sahara Rain - Sand In Your Hands 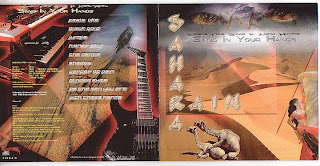 "Sand In Your Hands" is the debut album from the, Zurich based, Sahara Rain and it is a beautiful example of what can happen if you believe hard enough in something. Sahara Rain just wanted to make music and music they made! Some lyrics could be considered to be a tad over the top but I'm sure even the most miserly music critic can accept that lyrics have to be a bit more grand when you're playing anthemic, driving, cock rock that just makes you want to grow your hair out, fill your wardrobe with leather jackets and spend the rest of your life sending applications to join Whitesnake!


The album is filled with great tracks with the likes of "Higher Sky", "Centre of Pain", "Black Gold","Shadow", "The Dance" and "Blinded Eyes" all showing a huge amount of variety and talent! ("Be The Man" sounds like it should be the theme for a James Bond film!)

The band - Ricci on vocals, Dave Silhanek and Adrian Honegger on guitar, Levent Sunu on drums, Bo Rebsamen on keys, and Boet De Haason bass - play a tuneful, hard hitting music mixing atmospheric harmonizing into fanciful musicianship. The sound is forceful and laid back all at the same time. The star of the show is Ricci with his characterful vocalising. He's somewhere between Ronnie James Dio, Lemmy, Michael Bormann and Jon Bon Jovi. He has a great tone with a powerful volume of emotion bubbling beneath the surface. He has got to be one of the best singers I've heard this year who isn't signed to a label. The same goes for the rest of the band. Somebody needs to snap these guys up right away!

Do yourselves a favour, check this band out, you wont be disappointed!