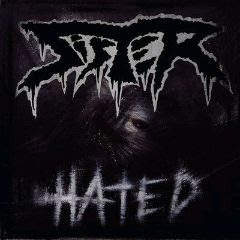 01 – Radioactive Misery
02 – Body Blow ‘Pissed Off N’ Beautiful’
03 – Bullshit & Backstabbing ‘We All Were Born Lobotomized’
04 – Hated ‘The Snakes You Thought Were Safe Spit In Your Face’
05 – Motherfuckers (Like You) ‘Can’t Destroy Me, Can’t Hold Me Down’
06 – Werewolves On Blackstreet ‘Peel The Skin From Your Broken Bones’
07 – Spit On Me ‘You Ain’t Got What It Takes To Stay In Hell’
08 – The Unlucky Minority ‘That’s Why I Tore Out My Eyes’
09 – Would You Love A Creature ‘Hypnotized Alcoholized’
10 – Too Bad For You ‘A Living Disease, Too Hard To Please’
11 – Drag Me To The Grave ‘Bottoms Up At The Edge Of The Fall’


This is not the Sister from the late 70's that once featured such members as blackie Lawless and Nikki Sixx, no this incarnation of Sister were formed in Stockholm/Jonkoping Sweden,2006.
Sister's Metal Blade debut, Hated, is a punk-laced slab of angry hard rock. “Hated” is an album that combines this new wave of Glam/Sleaze along with some Punk elements. If you’re into this new stuff you’ll understand what I’m talking about. The music is pretty filthy and raw and in combination with Jamie’s vocals they kick major ass reminding of bands like HARDCORE SUPERSTAR and BACKYARD BABIES with a Gothic / Shock Rock edge ala the likes of Alice Cooper and WASP.
These songs are not exactly going to set the world of fire, but they will enterain make a great party!
I love the angst, I love the passion and I love the tongue in cheek lyrics, this is what rock was all about back in the day!
GREAT album!!