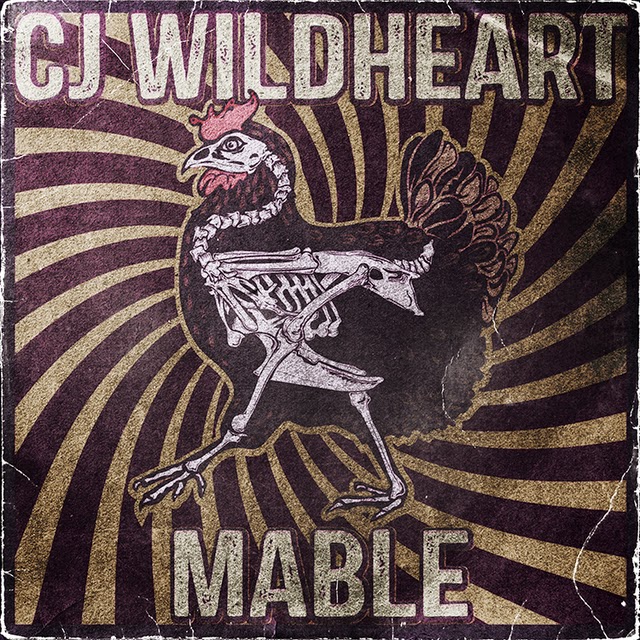 After what seems like an eternity CJ Wildheart finally gets around to recording and releasing his debut solo album, (previous releases include Honeycrack, The Jelly's and CJ & The Satellites) in the form of Mable, which is named after his favourite pet chicken!
So how did Mable finally come about, and whats the story behind each of its 11 songs, well who better to answer that than CJ himself?
"So, in June 2013 I started demoing songs which would lead on to me recording my first solo album in 7 years. ‘Mable’ is the result of me locking myself away in my home studio and just letting things take a natural course.
Like with any album there is a theme to the songs and this album loosely charts my last 3 years of life in London before I moved to North Yorkshire and the big changes about to happen in my world.
For those who do not know, I retired from music for 3 years as I needed a change and wanted to try something new…. I started my own cleaning business.
I employed 8 guys and worked for all sorts of folk, from the stupidly wealthy to the heartbreakingly poor. My last 3 years in London was me running my company
and sometimes dreaming of returning back to music but most of the time trying my hardest to bring home the bacon.
The frustration I felt with having to deal with the rich snobs who live in the city would leave me wanting to kill the stuck up fuckers but I would always pull back my rage…. anyway I also felt equally furious at Councils who would let OAPs live in their own shit and expect my co workers to clean it up for peanuts…. the same Councils who would waste millions per year on art and other crap…. go figure.
Well, something had to give and I married, sold my business and moved to the countryside and back to the music. The songs on ‘Mable’ are about my last few years in London and my life completely changing again when I picked up my guitar and moved north.
I’m fast approaching middle age and I’m about to become a father for the first time…. My album reflects all these changes and I hope you enjoy it. X
1) BETTER LATE THAN NEVER
The opening track and a wee ditty about getting it right…. eventually.
2) DOWN THE DRAIN
My message to Mother Nature telling her to get up and fight back against man.
3) NEXT TO YOU
You know when life gets too much and you just want a friend to comfort you, take you out for a pint and let you vent.
4) VITRIOL
This tune is a cover of the Bluejuice (A great band from Australia) song. I would play this a lot when driving around London…. it’s a good ‘fuck you’ song!
5) ALWAYS BELIEVE HER
In any relationship you have that great part at the beginning when it’s all new and nervous and then you get to the point where you either commit or run away. I didn’t run away and ended up marrying the girl…. those early days never leave you.
6) KENTUCKY FRIED
A song about running a cleaning business in the old smoke. The daily grind, traffic jams and frustrations.
7) D.C
Back in the early 90s my little brother Steve took me to a rave…. this is how I felt.
8) COME WITH ME
This is the oldest song on the album. I first demoed this in 2007 and the intro was used on ‘Plastic Jebus’ which is on ‘Chutzpah’
This songs charts my long battle with insomnia and sleeping tablets…. an on-going struggle even today but thankfully without the aid of pills.
9) STATE OF EMERGENCY
Angry people who blame everyone but themselves. There comes a point when you just have to grow up and take responsibility.
10) DEVIL
A song about temptation…. but from a junkies point of view.
11) MIDLIFE CRISIS?
The last track and a song about part of my life coming to an end and the beginning of something new and truly wonderful.
CJ"

But is the album any good? You bet your ass it is!
Opener Better Late Than Never begins with some quaint electronic noises and ambient effects before exploding into a great modern melodic rock riff. A great song and solid opener to the album! Next up is Down The Drain. This track has a darker feel, more of a solid riff and some great lyrics. I love how CJ has fitted the quite dark and serious lyrics into quite a poppy melody, wonderful song, although I'm still not sure what the hell the video has to do with the song! lol
Next To You follows and is not the lovey dovey ballad that the title suggests. A Slow to mid tempo rocker with a sort of stop start riff, and a cracker of a song. CJ is really on form here, both in his writing and vocals!
Next we have CJ's cover of Bluejuice's Vitriol, having never heard the original I cant comment upon how it compares, but what I can say is that its a great song a stunning performance from CJ, so Id say it probably compares rather well!
Always Believe Her is up next, and those electronic noises make another appearance during the songs intro, before a killer melodic riff kicks in, only for it to give way to the electronic noises throughout the verse. A great song with some interesting ideas throughout. Love it!
Kentucky Fried follows, which is another great mid-tempo rocker. This could be a killer track live!
The next song is D.C. a great track, again managing to blend electronic sounds usually more associated with dance music than rock with great rock riffs, and pulling it off really well.
Come With Me follows, with a darker feel to it both musically and lyrically. A great song with its familiar riff (explained above!)
State Of Emergency is up next and is possibly the most traditional rock track on offer on Mable. Its a great song and again I imagine will go down really well in a live environment!
Devil is the albums penultimate track, a dark track which twists and turns musically. Another great song
The album closes out with Midlife Crisis, another great traditional styled rock track, a real slow builder and a great choice to close out the album!

Mable shows that CJ is more than just the other vocalist / guitarist in The Wildhearts, it shows that he is one hell of a songwriter and solo musician too!. I say that because with the exception of a few gang vocals from producer Lee Potter Wray (Zen Motel) and Chris Catalyst (Eureka Machines / Sisters Of Mercy / Ginger Wildheart Band) everything on this album is played by CJ himself, even down to the drum programing!
Lee Wray does a sterling job with the production making Mable a stunning album.


Posted by The Sinister Angels realm at 20:41