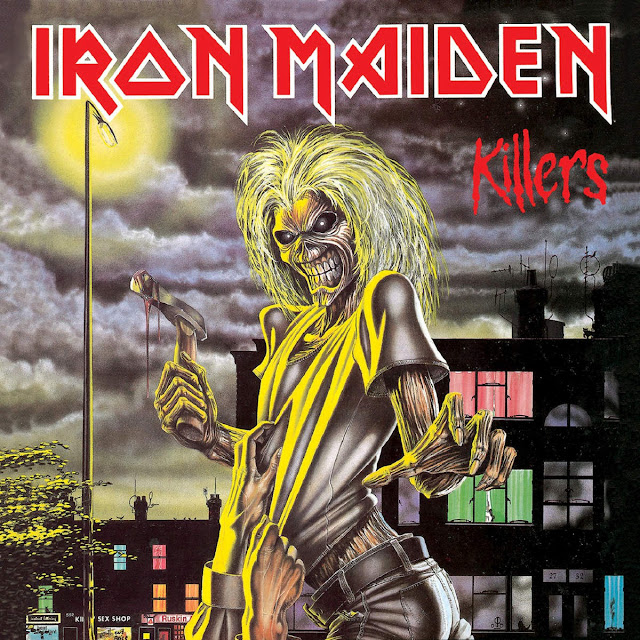 Track listing:
01 - The Ides Of March
02 - Wrathchild
03 - Murders In The Rue Morgue
04 - Another Life
05 - Genghis Khan
06 - Innocent Exile
07 - Killers
08 - Prodigal Son
09 - Purgatory
10 - Drifter
IRON MAIDEN in conjunction with Parlophone Records (BMG/INgrooves Music Group for the USA) have released nineteen catalog albums from the band which have been Remastered for iTunes, encoded from 24-bit / 96 khz high resolution masters. All these albums have been remastered with iTunes in mind, delivering the music to listeners exactly the way the artist and recording engineer intended.
These are brand new 2015 remasters from their original analog sources, exclusively produced for iTunes and supervised by Iron Maiden's founder Steve Harris.
Let's take a listen to "Killers", their first with guitarist Adrian Smith and their last with vocalist Paul Di'Anno, who was sacked after problems with his stage performance due to his addictions.
Iron Maiden's founder member Steve Harris comments about this superior mastering technique:
"The Remastering for iTunes procedure allows the listener to experience the music as close as possible to the way the artist intended it to be heard. So, of course, I was very keen for the Iron Maiden albums to be mastered in this way.
The records have been available digitally before, when this medium first became a platform for music distribution, but were mastered with CDs in mind. The iTunes process involves a different approach and it's great to finally deliver the music to our fans in as close to a pure and accurate sound as we could possibly achieve."
Harris continues; "Now, the guitars are louder, the drums more substantial and the overall tone is so very much improved, in my opinion.
Tony Newton and Ade Emsley, who worked closely with me on the project, did a terrific job recapturing everything from the original masters, and together we've re- mastered them all digitally and I'm really happy with the results."

With Adrian Smith as new guitarist, together with Dave Murray, on "Killers" Iron Maiden started to define the twin guitar attack that would be the trademark of the band in their most fruitful period.

Killers gave us such Iron Maiden classics as 'Wrathchild', 'Murders In The Rue Morgue', 'Purgatory', 'Innocent Exile' and the albums title track itself, 'Killers', all of which sound absolutely stunning with their new mixes and remastering. Every note seems that much sharper and clearer.
I know that many fans get irritated with the constant re-releases and remasters that many of the bigger bands put out, but this is one set that really is worth having!
Rating - 10/10