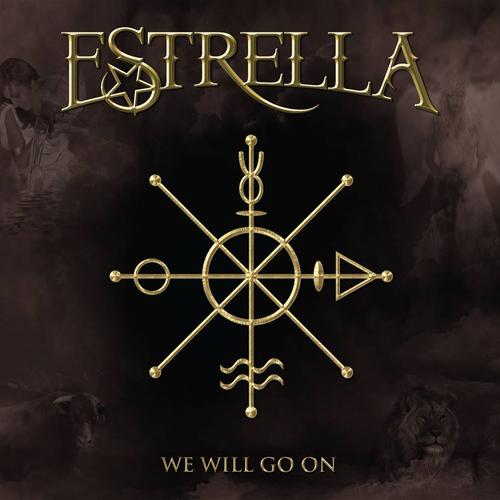 After three years of waiting, the long awaited follow up to Scottish four-piece ESTRELLA stunning debut album is finally upon us.
Since the band's first album Come Out And Play way back in 2012, the boys from Thurso have played the UK from top to bottom alongside some of the biggest name’s in rock and they have amassed quite the following as a result as well as making a few trips across into Europe supporting the likes of Robin Beck and they’re just back from a lengthy tour with Enuff Z’Nuff.
Anyone familiar with the band’s previous album will have some idea what to expect but to borrow a greatly overused analogy, "We Will Go On" takes everything we know about the Estrella formula and turns it up to 11.
The new record has a nicely rocked up sound with a classic feel to it all. By 'classic feel' I mean classic rock feel a-la 1970s/1980s edges. On listening it’s not surprise that the band is being mentioned highly by the likes of Classic Rock magazine with 'Here I Am' (first single) awarded track of the week.
For people new to Estrella, their music is in the mould of Def Leppard, Van Halen, Aerosmith, Thunder, some Bon Jovi, and it’s nothing if not good fun.
And 'Here I Am' opens the album as well. From the very beginning with it’s 'na na na na na na' chorus you can tell it’s a real crowd pleaser. There are some great guitar elements and singer Paul Gunn has grown in stature and experience since the first CD. He reminds me often of Def Leppard's Joe Elliot, always enjoying himself but also a complete frontman, making sure everyone is having a good time.
Title track 'We Will Go On' is all about how much the band enjoy playing live and seeing the crowd enjoying themselves. It’s another song that comes across as a perfect live track.
'Reason' and 'This Heaven' are strong contender’s for being named best song on the album and are quite possibly the best tracks the band have penned to date. 'Reason' in particular could be amazingly realised in a cheesy '80s power ballad music video set in a dusty airfield with some strong wind effects and a setting sun before heading into a deserted aircraft hanger for the final chorus. Also, a mountain top solo wouldn’t go amiss!
A standout song for me is 'Hard to Get', where the guitars take on a fuzzier tone, and the melody is slower. Paul’s voice is given a chance to shine amongst some great solos and the rhythm section playing at the low end really come to the fore.
Special mention also to 'Rock City', a great classic rock track, and 'Be There', more of a ballad (akin Bon Jovi) and a total sing-a-long track.
Estrella, comprising brothers Paul, Luke and Nathan Gunn, and Leo McPherson have gone all out with this album, putting together a production team who have worked with some of the biggest names in the business, including pre-production and mastering by Pete Shoulder (The Union), Luke Morley (Thunder), and Pete Mayer (Rolling Stones) and production by Nick Brine (The Darkness, Thunder).

Posted by The Sinister Angels realm at 21:28