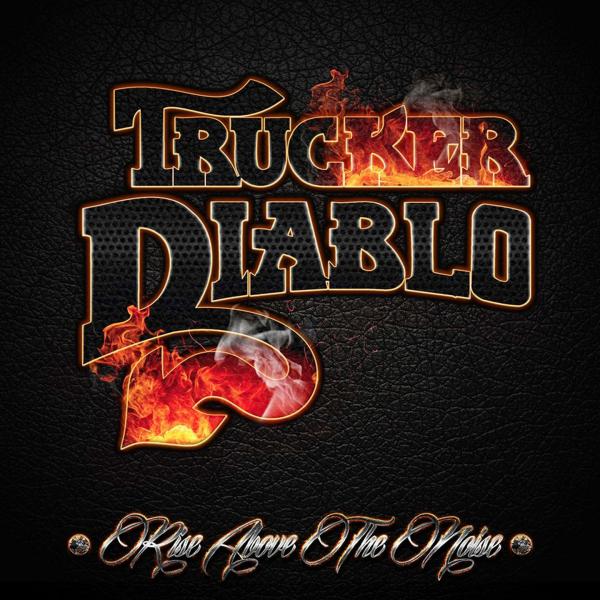 Northern Ireland hard rockers TRUCKER DIABLO made quite a name for themselves with a couple of interesting albums and amazing liver performances, but just when major success was knocking  at their front door, one year ago, the band decided to take an indefinite hiatus for personal reasons. Well their back!
The guys (minus bass-player Glenn Harrison who decided not to step on board again) have just released a new album entitled "Rise Above The Noise", and what a kickin', rockin' album it is!
Trucker Diablo refer to themselves as 'stadium pub hard rock', and it pretty sums up their style perfectly. With a hint of a classic pub sound wrapped up in a huge, brave and outgoing package that rivals that of many great touring rock acts, it’s obvious from the opening note of the first track, "Fight Life", that these guys mean business.
The first thing to strike the ears is the perfectly constructed guitar sound that rings through with enough crunch to make a crowd bounce, yet clean enough to hear each note resonating. This is played with a mid-tempo beat to propel the song forward at a steady marching pace. This has a certain Lynyrd Skynyrd feeling to it, but with a modern kick behind it that instantly makes its verses active and its melodic chorus catchy.
The song that really sets the bar for the CD makes its appearance as the album’s second track, and truly displays the band’s 'stadium' abilities. "Party Like They Started The End of The World’" takes off like a bullet with a dizzyingly powerful riff, backed up by a fantastically funky bass line which plays support to the singer between the guitars’ punches. It’s got everything you’d expect from a song based around apocalyptic party-hefty riffs, a fun groove, and classic rock style solo. This has to be easily one of the most entertaining rock songs to come out of Ireland since Thin Lizzy‘s Thunder and Lightning.
However, it soon becomes obvious that Trucker Diablo are not resting on their ‘party rock’ reputation, and this re-invigorated line up is prepared to explore new musical avenues. "Somebody Save Me" is the first of the tracks to introduce a slightly darker, mellower feel to album: the crunch and grit is still there, but it possesses a deep and elegiacally melancholic vibe.
"We Stand Strong" shifts back up through the gears again, as the quartet put the pedal to the medal with a fast-paced hard rocker, characterized by another punchy main riff, accentuated once again by McGurk’s understatedly solid bass work, before "Where Angels Fly" totally changes the mood. Led by Keith (The Quireboys) Weir’s plaintive piano, it’s a deeply personal lament, with Harte delivering a surprisingly heart wrenching vocal, with the result being a thoroughly beautiful, soulful ballad guaranteed to melt even the hardest of hearts.
"Girl In A Photograph" very much echoes the band’s adoration of Thin Lizzy (but then what Irish rock band is not influenced by Lynott and co?), with its rolling double guitar melody: however, where Lizzy legacists Black Star Riders continue to regurgitate the riffs to ‘Emerald’, ‘Jailbreak’, etc. almost ad infinitum, Trucker take it as a starting point and positively stamp their own identity on it, adding melodic and progressive tangents.
"Take Me To The River" has a more bluesy feeling, "Murder Ballad" demonstrates the rich depth and variety of band with its combination of thumping riffs and rich lush melodies, and closer ballad "Don’t Cry" is an appropriate choice of final track, built on a sweeping melody and another gorgeous and deeply personal lyric/vocal from Harte, recalling Extreme's acoustic pieces.
If having to clear the decks and switch off the noise for a while produces an album of this verve, this vibrancy and this clarity, then maybe more bands should try the Trucker Diablo formula, and stop a year.
Certainly, "Rise Above The Noise" rocks wonderfully. It's punchy, it's modern yet classic rock inspired, all songs are good and the guys play from the heart.
What else you need to enjoy a cold beer and party on?

Posted by The Sinister Angels realm at 19:33