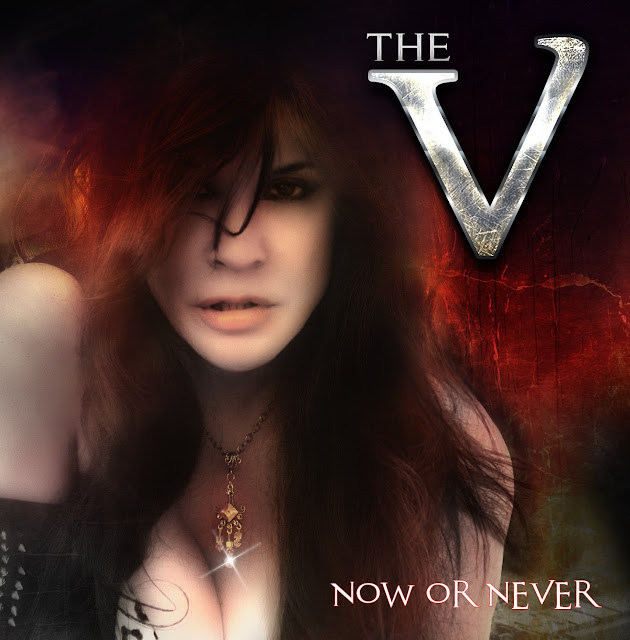 Genre - Hard Rock
Label - Frontiers Records
Track listing:
01. Again
02. Now or Never
03. Rollcoaster
04. L.O.V.E
05. Line in the Sand
06. Love Should Be to Blame
07. Kiss My Lips
08. Spellbound
09. Starshine
10. Below Zero
11. Ready to Run
12. King for a Day (feat. Tony Martin)
Released by Frontiers Music, "Now Or Never" is the debut solo album from reputed vocalist Veronica Freeman (Benedictum) under the mysterious moniker of THE V, where she ventures away from her traditional metal style of lead vocals over a (melodic) hard rock material.
Helping Veronica out musically we have a varied cast of hard rock icons such as Michael Sweet (Stryper), Jeff Pilson (Dokken), Jerry Dixon (Warrant), Mike Lepond (Symphony X), Tony Martin (ex- Black Sabbath) and more. "Now Or Never" shows that The V can wrap her tonsils around a wide variety of hard rock tunes where she displays some unexpected qualities and successfully try to stretch herself out with different singing styles and different approaches (check "Starshine").
Opener"Again" starts off like most songs in Freeman’s catalog, but the vocals soon shift gears and give this more of a hard rock/melodic feel that her typical heavy metal fare. Title track "Now Or Never" kicks off with strong bass & drums, then soon morphs into a cool melodic rock based track with searing leads and riffs that accompany Veronica’s rocking vocals.
"L.O.V.E." is one of the tracks that take on a different sound and feel compared to others on the disc, and a personal favorite. The vocals really stand out, especially when the chorus comes in. The drums are big on this track, as are the guitar riffs.
“Love Should Be To Blame” chugs along and gives the disc an edgier sound. The lower range of Veronica’s vocals in the chorus give her a sultry vibe that adds to the delivery of the emotionally charged lyrics.
“Spellbound” takes on a darker, more straight sound that is very reminiscent of early '80s recordings from labels like Metal Blade. The bottom end is full and adds punch to the track in a hard rock / US metal vibe.
“Below Zero” has a heavy bass line that runs through it, even when the guitars are lighter and the vocals are charging from verse to chorus and back. The different bassists featured on the disc include Jeff Pilson, Mel Brown, Garry Bordonaro, Aric Avina, John O’Boyle and Mike Lepond.
“Roller Coaster” comes charging out of the gate and doesn’t let up from first note to the last. The drums, played by Derek Kerswill on the entire disc, keep the track anchored and the tempo steady.
Line In The Sand” is a melodic gem that stands out on this disc. The guitars soar and build the mood of the track and allow Freeman to run rampant with some of the best arranged vocals here.
“Kiss My Lips” is one of the highlights too, as it is totally upbeat and full of rockin' energy. The guitars are full, the drums blast and the bass lines strong and steady. Throw in a cool duet between Veronica and Chastain's lead vocalist Leather Leone and you have a killer song.
Producer John Herrera utilized several guitarists to put this disc together, including Pete Wells, Michael Sweet, Peter Tentindo, Jimmy Durkin, Mick Tucker, Jordan Ziff, and Michael Harris.
“Starshine” shifts the mood of the disc with a lighter rock track (semi-ballad) that moves further from Freeman’s comfort zone, but allows her vocals to take the spotlight and run. The acoustic guitars and additional vocals from Meliesa McDonell give the song a little something extra at the chorus.
“Ready To Run” opens up like Motley’s Wild Side, but soon takes its own lead and direction, giving Freeman room to show off her vocals in a hard rock / melodic twist that gives the song a little depth.
Disc closer “King For A Day” features a heavier and bluesier groove that carries the track while Veronica and the great Tony Martin trade off verses and duet at the chorus.

Posted by The Sinister Angels realm at 20:11