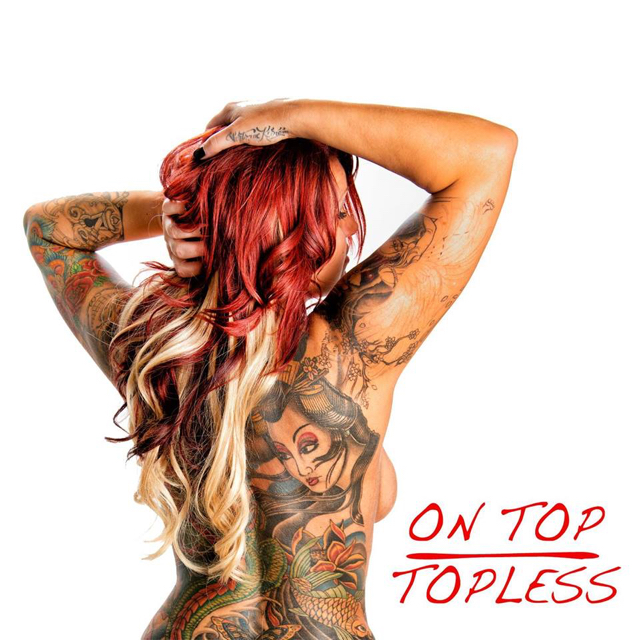 Genre - Hard Rock / Glam / Sleaze
Label - Toil Records
Track listing:
01 - Lie to Me
02 - Crazy
03 - 282
04 - Got Me Runnin'
05 - No Shame
06 - Cold and Blue
07 - Don't Go
08 - Bad Love
09 - Hot N Wet
10 - Into The Night
11 - Sleepless
12 - Too Much
Pennsylvanian three piece ON TOP have decided that the likes of Poison, Faster Pussycat, Skid Row and Motley Crue had so much fun 30 years ago that there’s very little reason that they shouldn’t join in too. "Topless" is their 3rd effort, and if you think '80s influenced glam metal / sleaze was dead in America, then better listen this corker.
Take the opening lines of '282': "Running with the devil / Pedal to the metal / Its all about getting paid / eyes on the gold / body’s been sold / at least you’re getting laid..." so sneers vocalist / bass player Jaron Gullino, over a riff that takes Crue’s Kickstart My Heart as its inspiration and gets sleazier from there. If that doesn’t make it clear that we aren’t dealing with anything too taxing then nothing will.
Those of us that fancy a dip into the hard rock of old will find much to enjoy in the carefree filthy groove of 'Got Me Runnin', while 'Lie To Me' manages not to be ballad and instead keeps the upbeat rockin' spirit needle in the red.
No, there's not ballads here. In fact, ON TOP are pretty heavy at places, mixing some dark Lynch Mob’s style riff stuff into the mix. Just checkout 'No Shame'.
Jaron Gulino’s double duty of vocals and bass is more memorable for the latter, as the raunchy bass line is excellent. He's not bad on the mic either, he owns a natural hard rock voice, clear & sleazy, just a bit linear sometimes.
Brian Davis is quite hot on guitar, replacing Alex Kulick since the bands’ last release. Danny Piselli’s drumming is heavy yet deliberate, and he completes a band that sound tight and ready to unleash havoc.
'Cold and Blue' has some Motley / LA Guns feel, but the melodic chorus and multiple guitar hooks finds a band simply being themselves. Gulino’s vocals are more aggressive here than your normal glam rock vocalist, and this is refreshing to hear.
'Don’t Go' grabs a few tricks from the old Aerosmith bag o' dirty tricks in the way of snorting riffs and bluesy shucks. However, there's a raucous Sunset Strip ready chorus.
Then the six-minute 'Bad Love' refuses to let up the balls out rawk, more polished than the previous and with some hair metal on it and high quality solos from Davis.
On Top is a band straight to the point: party rockers, easy melodies driven by strong riffs and choruses, combined with the thick and clean production make this a very enjoyable trip back to ‘80s US glam / sleaze hard rock.
However, the trio is pretty modern with the set-up sound, and this could bring young listeners to this genre and forget the crappy modern rock ruling American radio right now.
Great Stuff.
Well Worth Checking Out

Posted by The Sinister Angels realm at 19:16