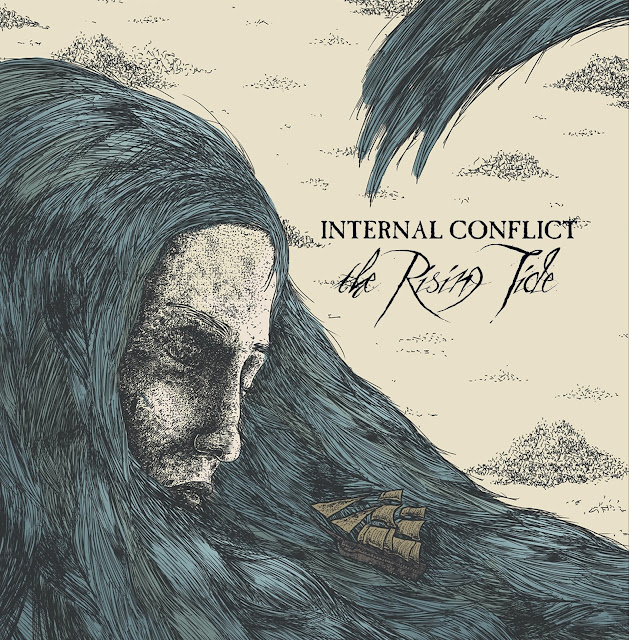 Internal Conflict are a five piece Hardcore/Metalcore/Metal band hailing from Leicester (UK)with an ever growing fan base, and now having just completed a very successful co-headlining tour of the UK with Ballsdeep, Internal Conflict are now preparing for the release of their new album 'TheRising Tide'. The band are made up of: Adam Kyle (Vocals) Sean Rice (Guitars), Matt Hall (Guitars), Dan Laffar (Bass) and Dan Robbins (Drums).
With influences ranging from: The Haunted, Machine Head, Lamb of God, Parkway Drive, As I Lay Dying, Gojira, Darkane, Chimaira, Death, Pantera, Slayer, Sepultura, In Flames, Soilwork, Testament, Devildriver, Sylosis, Malefice, Mastodon, Pink Floyd, Dream Theatre, While She Sleeps, Bleed From Within, you kind of have an idea of what to expect from these guys, it’s going to be hard, fast, aggressive and heavy!
Now I have to be brutally honest here and admit that I am not the greatest fan of the hardcore/meal genre’s, hell to be honest Gallows are the only real hardcore band that I can say that I am a fan of, but I am approaching this album, and review with a totally open mind.
Internal Conflict seem to have been impressing all the right people, gaining comments such as, "the passion was certainly visible". (Getyourrockout.co.uk), and Internal Conflict "clearly mean business" (midlandsmetalheads.com) and their music has even been described as "a riot transcribed into musical form", which is a pretty apt description to be fair.
The first thing that I notice just how mature and accomplished the musicianship is on every song, no hints anywhere that this is the band’s debut album. The guitar work of Sean Rice and Matt Hall stands up there alongside that of any of the bi9g bands, and the rhythm section are as solid as anything, not only providing a solid base for most of the songs, but in many cases driving them along! Vocalist Adam Kyle sure has a set of longs on him too!
Every song upon ‘The Rising Tide’ is well written and well performed, with the band managing to capture all the intended anger and rage to perfection, and trust me there is plenty to be found upon ‘The Rising Tide’. Your ears take a pummelling with every track, fast aggressive pounding riffs, coupled with Adams vocals from Satan’s very own gut, and there is not a bad track to be found anywhere. My only gripe with the album is that it could do with a little more variation, after all, I could do with the odd slower kore atmospheric track thrown into the mix so that I can catch my breath so to speak.
Stand out tracks for me include, title track, ‘The Rising Tide’ and the albums closer ‘Deprivation’ which see’s the band at their most versatile.
A good solid debut album that is sure to please pre-existing fans of the band, and garner a fair amount of interest from fans of the genre too.


Well worth checking out.
Rating 8/10

Posted by The Sinister Angels realm at 18:49