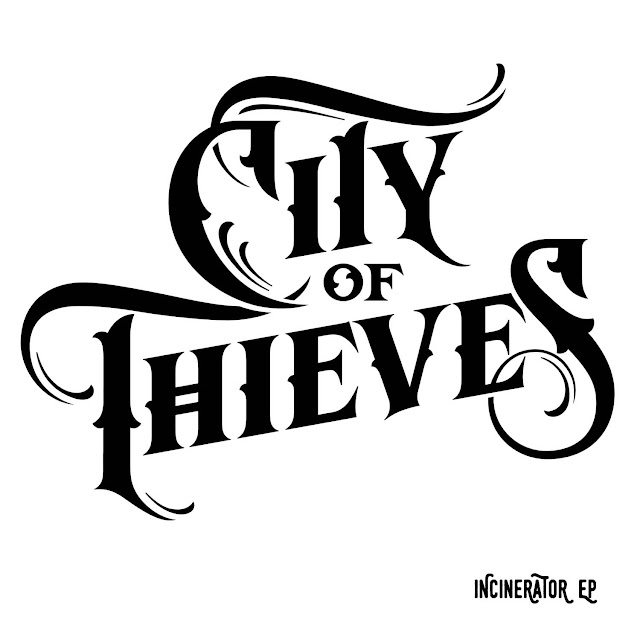 
"Since making their live debut at Camden Rocks Festival in May, the buzz is spreading about City Of Thieves – no frills, no messin', no gimmicks – it's heavy rock in its purest form and will send you straight to the front of the stage with sledgehammer riffs, hooks and melodies."
"With producer Toby Jepson at the helm, Mike Fraser on mixing duties and mastering by Simon Francis (Kodaline, Kaiser Chiefs, Primal Scream) the vision of this new material was in the best of hands. When asked what he thought about City Of Thieves, Mike Fraser simply replied "Killer band...Killer songs". This is not a throwaway comment, this is from a true craftsman whose worked on albums for Metallica, AC/DC, Slipknot, Aerosmith and more."

City Of Thieves are a new band hailing from the UK, playing that good old fashioned British Hard Rock the way that it should be delivered, with heart and passion! No frills, no bullshit, just good solid songs and a great band, a simple and perfect formula if you ask me.

The EP's title track, 'Incinerator', opens things up, with a groove and a swagger expected more from a long established band as opposed to new kids on the block so to speak. A great start, good solid track that oozes confidence.
Next up we have 'Lay Me To Waste', another great track that changes things up a little. More melodic this one, yet still with plenty of meaty riffs. Toby Jepson has done a great job of capturing the bands real essence on these songs. 'Buzzed Up City' follows, and this track has to be my favourite on offer here, its such a great song, full of energy and passion, together with a riff AC/DC would kill for.
'Here Comes The Shot' closes out the studio recordings on offer here, and does so in style! A monster of a track, that once again see's the guys mixing things up a little.
The EP closes out proper with the live acoustic recording of 'Mr 50/50', yet another great song, capturing the raw energy and spirit of the band.

Incinerator proves that City Of Thieves have a lot to offer, and when paired together with the likes of Screaming Eagles, BlackWolf, Rank Berry, Rusted Hero and Cage The Gods, they show that the UK's Hard Rock scene is truly alive and kicking!

"With Planet Rock Radio playlisting 'Incinerator' and show announcements happening NOW - City Of Thieves will release their EP 22nd September 2015 via Townsend Records, with the debut album scheduled to be unleashed in 2016.

These guys aren't just here to steal your soul for the love of rock n' roll...they're here to DEVOUR it. Tune in, turn it up...we'll see you down the front."
Very Highly Recommended!