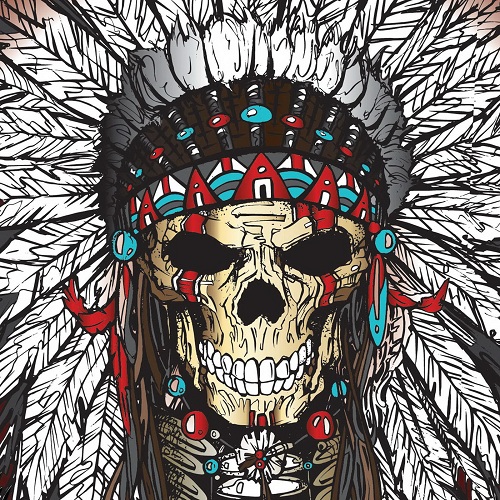 
Legendary Dokken guitarist GEORGE LYNCH's long awaited "Shadow Train" project finally comes to light in this all new 18 track Deluxe Edition 2 CD set.
George's stellar guitar work, along with vocalist Gregg Analla (a descendant of the Isleta Pueblo Indian tribe), bassist Gabe Rosales (Lynch Mob), keyboardist Donnie Dickman and drummer Jimmy D'Anda, create honest, soulful and meaningful bluesy-based hard rock, that makes this release a must have for all George Lynch, Dokken, Lynch Mob (et all) fans.
The music in "Shadow Train" also provides the musical support for Lynch's upcoming, thought provoking documentary that explores the trials and tribulations that face Native American Indians in our world today.
The deluxe edition two-CD, 18-track studio album highlights Lynch’s signature guitar style. And it should be noted that this band effort is not specifically a 'Lynch' solo excursion. The music is atmospheric at places, eclectic and explorative, and it taps into the Bluesy, Hard Rock genres with which Lynch thrives.
Lyrically, there is no hiding the social commentary; it voices the plight of Native American Indians as the United States deliberately diminishes the value of its historical narrative of the original strong, proud independent nations of North America.
While the imagery and the documentary sell the concept of the injustices done to the Native American Indian tribes, the lyrics also explore socioeconomic inequalities and touches on materialism, environmentalism, racism and elitism, among other issues.
Vocally, Analla provides the perfect complement to Lynch’s serpentine fretwork. His voice brings influences from the Rock genre, along with his own Native American cultural background, which invites listeners into the diverse multicultural experience of "Shadow Train".
The second CD offers music fans a glimpse into the creative exploration of a band looking for an identity. It tastefully combines years of collective experience among individual musicians and produces what is an eclectic soundtrack of music that became the definitive roadmap to the group’s musical soul.
The canvas leans on atmospheric arrangements highlighted by Lynch’s guitar, but it also is driven by the vocals, bass and drums and is polished by the keys.
CD No. 1 actually was recorded after the second CD. The newer set of songs is a collaborative effort of five guys who spent a whole lot of time knocking around together, working on the documentary, writing and performing.
Going back into the studio, the band created an additional nine songs that showcase a matured vibe, which is a tighter assimilation of the "Shadow Train" sound. These tracks are painted with words and music that are reflective and maybe controversial (depending on your point of view), but they most certainly are thought provoking.
The music on "Shadow Train" certainly sees Lynch reaching for the pinnacle of his career, where all the stars align and that one moment of clarity is achieved.
Built upon the backs of his early bands, including The Boys, Dokken, Lynch Mob, his solo work, instrumental albums and projects (KXM, Sweet & Lynch, Lynch/Pilson), Lynch never has stopped striving to attain the elusive carrot. Partnering with Gregg Analla, Gabe Rosales, Donnie Dickman and Jimmy D’Anda, Shadow Train’s self-titled studio album is a defining moment for Lynch and his fellow bandmates.
“I’ve spent more than four decades of my life pursuing elusive musical aspirations. But, for even longer than that, I’ve cared, studied and thought deeply about the human condition and how we interact with each other and the world around us. Fusing these two aspirations into one has been a challenge for me throughout my creative life.
This is my attempt at bonding the music and the message into one cohesive whole.” – said George Lynch.
Here’s hoping that the new Lynch Mob is as good as this excellent "Shadow Train"!
Right now, "Shadow Train" offers Lynch fans some of his best written and recorded music to date.
Rating - 9/10
Posted by The Sinister Angels realm at 19:43