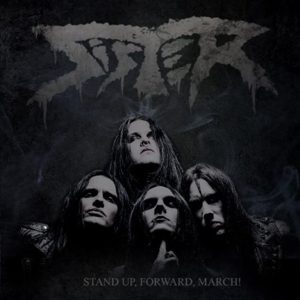 Sister is all about classic sleaze / glam without the dirt. Yeah, they sound incredibly clean and bright, and despite they have a somber, dark image, their songs are darn catchy.
Of course sister has that ol' sleaze punkish attitude in the way that early Motley Crue was, if opener 'Destination Dust' isn’t enough to get you looking for your Spandex pants, then 'Carved In Stone' probably will. Essentially because it boasts a hook so huge that it’s like taking a wrecking ball to a Wendy House.
The feeling that is just hedonistic fun, is rather re-enforced by a line in its lyrics: “you’ll pray for mercy to whatever gets you off” sings Jamie Anderson, and this is the soundtrack to whatever night you feel like letting go.
Some tracks may you remind of Crashdiet or Shotgun Messiah, but it is worth saying that "Stand Up, Forward, March!" isn’t some retro bullshit made by a load of blokes who should know better.
'Lost In Line' for example adds some modern flourishes to its work, “Carry On” is a ballad-ish thing which has more than an echo of Backyard Babies and an updated poppy feeling.

Largely, though, this is about slammers. 'Unbeliever' might do a kind of power metal fists in the air power metal, but it knows where its bread is buttered too, and when they do let things breathe a little like on 'Let It Bleed' it is only so they can make things even more ominous than they were.
I really like Sister when it's about balls out rock 'n roll / hard rock, like “Dead Man’s Dirt” and the positively punky sleaze nihilism of 'Piece Of Shame' which ends things.
Then the fact that Sister keeps just enough diversity of sound in their tracks as it’s not the same exact thing eleven times over but nothing drastically different, it shows that Sister has a real understanding of the sound they were going for, and it ends in pure excellence in this scenario.
Jona Tee of H.E.A.T has done a terrific job focusing Sister to catchiness.

Sister's third album "Stand Up, Forward, March!" rocks.
Some say the first albums the only good albums from a band, others claim third time’s the charm, and others like myself believe that any album can be great. Both the latter and the second prove to be true with this record, and it shows that Sister isn’t by any means a band to put out one decent record and then immediately face plant creatively, but quite the opposite.
“Stand Up, Forward, March!” demonstrate how much of a killer power house Sister is as a whole, and it’s very hard to deny that after hearing this ravenous piece.
Rating: 8/10

Posted by The Sinister Angels realm at 20:16