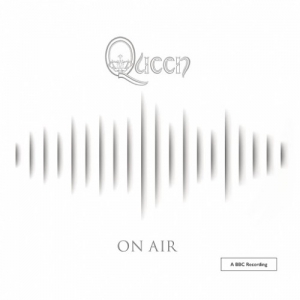 
On Air is the latest release from British Rock legends Queen, featuring for the first time ever officially (almost) every track that Queen recorded in session for broadcast by the BBC in the early 1970's. I say almost every track as one track from Session 4, 3rd April 1974 appears to be missing, that being March Of The Black Queen, but this is due to the fact that the band have always maintained that it was the album version of this song that was broadcast, therefore a BBC session track is not available to release, although this fact had been contested at times by various knowledgeable fans.
Queen’s meteoric ascendancy during the 1970s has been well documented. From their gloriously ambitious self-titled debut album of 1973 through to the album that put them in the superstar bracket, 1975’s A Night At The Opera, and beyond, this unique group carved out a singular path as the most visionary, inventive and charismatic band of that epic decade.
But there is another side to Queen’s rise that has been largely overlooked. Between February 1973 and October 1977, the band recorded six radio sessions exclusively for the BBC. The twenty four recordings these landmark sessions produced include alternate versions of the debut single, unique takes of classic album tracks and even a radically reworked reimagining of one of their best known anthems that has never previously appeared on any Queen studio release.

Now, for the very first time, all six Queen BBC sessions - meticulously restored by Queen engineer Kris Fredriksson and mastered by Grammy Award winner Adam Ayan - have been brought together on Queen On Air, released by Virgin EMI. North America through Hollywood Records. Available as a 2-CD set and a 3-LP vinyl edition, plus a Deluxe 6-disc edition featuring a CD of live broadcasts and 3 CDs of radio interviews, Queen On Air is an essential addition for connoisseurs of the band.
Back in 1989 the band did release a single disc album, Queen At The Beeb which featured the eight tracks from Sessions one and three, but this is the first time that all six BBC session have been made available for official commercial release. And before I go any further I have to say that Kris Fredriksson and Adam Ayan have done a fantastic job here, as the sound quality throughout every song on this two disc set is fantastic!
Queen’s very first session for the BBC, which opens Queen On Air, dates from February 1973, five months before the release of the band’s debut album and single. Imagine that you are listening to the radio in early 1973; no-one in the world has heard any Queen recordings EVER! John Peel plays My Fairy King, the very first Queen song to be broadcast on radio anywhere, and the story begins. He follows with Keep Yourself Alive (the song which later became their first single), the laidback Doing All Right and the epic rock operetta Liar (one of my all time favourite Queen songs!)– all of which serve notice of the arrival of a major new musical force.
The band returned to the BBC for their second session in July 1973, the same month their debut album was released. Revisiting Keep Yourself Alive and Liar, this time they also covered the heavy-as-lead Son And Daughter and the bluesy See What A Fool I’ve Been. The latter, which has never appeared on any Queen studio album, would later be re-recorded and become the B-side of their breakthrough hit single Seven Seas Of Rhye in 1974. In fact See What A Fool I’ve Been is one of the most interesting tracks here as it is performed in a straight serious manner and not with the overtly camp lead vocal that Freddie chose to use for the only other official release of this rare Queen song!
By the time Queen recorded their third BBC session in December 1973, they had already begun work on their second album, Queen II (eventually released in March 1974). The band premiered a new song which would feature on that album, Ogre Battle, which bares a stunning similarity to the live version of the song, alongside three classics from its predecessor, the galloping Great King Rat, the Roger Taylor-sung Modern Times Rock’n’Roll which seems to be performed at a faster tempo than any other available version out there, and a new version of Son And Daughter. Two more Queen II songs were recorded during a subsequent session in April 1974 – the epic White Queen (As It Began) and the delicate ballad Nevermore, which is another of the most interesting tracks on this release with its addition percussion that never made the album version of the song,  alongside a re-recorded Modern Times Rock’n’Roll.
Queen’s penultimate session for the BBC took place in October 1974, a month before the release of their classic third album, Sheer Heart Attack. The session saw the debut of four songs from that record: the dazzling Now I’m Here, the proto-heavy metal thrash attack of Stone Cold Crazy, which would covered by non other than thrash titans Metallica in years to come, the caustic Flick Of The Wrist and Tenement Funster, their celebration of the rock’n’roll lifestyle.
It would be another three years before Queen returned to the BBC for their sixth and final session, by which time the success of Bohemian Rhapsody had turned them into a global phenomenon.
On October 28th 1977, they recorded some radically different versions of four songs from the brand new News Of The World album, on the same day as it was given its UK release: the epic power ballad Spread Your Wings, the steel-plated rocker It’s Late,with this versions mid section morphing into elements of Get Down Make Love,  the dusky jazz number My Melancholy Blues and two significantly contrasting renditions of the global hit We Will Rock You – the ‘regular’ version and the ‘fast’ version, a full-tilt guitar-heavy take on the song. The accelerated version on Queen On Air is the only known studio recording of this live favourite.  “’We Will Rock You’

These two discs alone are must haves for any Queen fan, as they showcase the bands early development, along with their true hard rocking classic rock roots!

To complete the full picture, the 6-CD Deluxe Edition includes Queen Live On Air – a single disc featuring highlights of three live concert broadcasts: Queen live at the Golders Green Hippodrome, from September 1973, their first concert to be transmitted on radio anywhere in the world. Also, Queen performing in Brazil at Sao Paulo’s gigantic Morumbi stadium to a record-setting audience of 131,000 originally relayed live on radio and TV in March 1981 on the Badeirantes network during the band’s infamous South America Bites The Dust tour. Finally, Queen’s penultimate live concert radio broadcast. Aired less than four weeks before their last show with Freddie, this was a live emission from the show in Mannheim Germany, in June 1986 during the mighty Magic Tour.

This really is a great release, long over due!

Posted by The Sinister Angels realm at 19:15