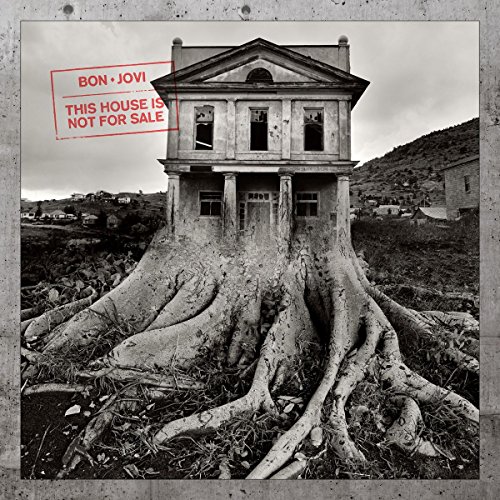 "This House Is Not For Sale" is BON JOVI’s new album, and in my honest opinion ion is the best album that they have released in years!
This is Bon Jovi's fourteenth studio album in a long and winding musical road that spans more than three decades and total record sales of more than 130 million units worldwide. Bon Jovi is, quite simply, one of the best-selling bands of all time. And, like many other mega-bands, its members have weathered their share of storms.
Opener title track "This House is not for Sale" has an explanation; "The House" described in this arena-ready single is the band itself, and the whole "not for sale" aspect seems to be an extra punch toward the label, as well as a beat toward the future, which the singer assured "is bright."
"Living with a Ghost" is  another straightaway rock banger with a sweeping guitar melody, then "Knockout", the album's eventual second single, felt fairly old-school, '80s in essence.
"Labour of Love" is the album's first ballad, pretty Springsteen-esque for my tastes. "Born Again Tomorrow" is the "we need to sound like 2016" song.
"Rollercoaster", an up-tempo rocker with a fine dynamic chorus, and even much better with "The Devils in the Temple" and its lyrics with a explicit "screw you" to the record label. Its also one of the best songs that I have heard this year!
Lyrically, "Scars on this Guitar" s Bon Jovi's best work in a while, an ode to a lover — presumably wife Dorothea — who sticks around through thick and thin. It's not that the ballad is so poetic, it just feels like more real, from the heart, and not written solely to blare from MetLife Stadium speakers. It also feels like the natural successor to "My Guitar Lies Bleeding In My Arms" from These Days!
"God Bless this Mess" rocks again with a cool melody and nice guitar riffs, and "Come on up to our House" is a decent mid-tempo with a contemporary feel.
The Deluxe Edition featured 3 bonus; the first being the really good (to me) "Real Love". Kudos to Bryan on the bounding, tonally beautiful piano melody for this tune, written in Nashville with longtime Bon Jovi collaborator Billy Falcon, and in the same vein as Bed of Roses.
"All Hail the King" is a typical 2YK light rocker, and "We Don't Run" is taken from 2015's fan album/record label demand Burning Bridges, another big rock chorus ready for large stages.
"I Will Drive You Home" is a slow mid-tempo beautiful song,  "Goodnight New York" picks up the tempo with its catchy rhythm guitars and a fun vibe.
This Saturn exclusive track 'Touch Of Grey' is one of the best tracks form these recording sessions, a mid-tempo with some acoustic guitar into the mix and a feel akin Bon Jovi's These Days album.

A marvellous return to form for one of the worlds biggest selling bands!

Posted by The Sinister Angels realm at 21:45