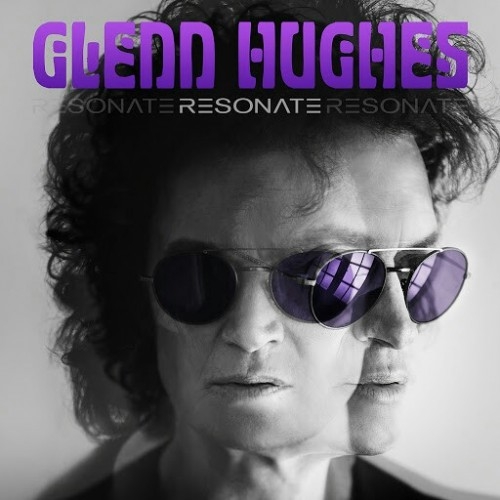 "Resonate" is the first GLENN HUGHES solo album in eight years, and is to be released via Frontiers Records.
To say that "Resonate" lives up to its name is to understate Glenn Hughes’ pivotal role in hard rock related music. Both his music and his stage performance has always been about the twin pillars of drama and dynamics and he reverts to type here.
From his constant rumbling bass and stratopheric vocal whoops that transform a heavy duty groove into something unexpected, to the bone crunching guitar lines of co-producer Soren Andersen, Hughes and his band move every last air molecule in the studio.
Given that this is his first solo album for 8 years, he works hard to re-confirm his hard rock credentials. There’s barely a tip of the hat to his mid 90′s jive ass funk and blue eyed soul, except for ‘Landmines’, which combines funk and a vocoder break, and the closing rock ballad ‘Long Time Gone’.
The title track ticks all the right boxes as his impassioned phrasing provides a sharp contrast to the booming rhythm track. His sudden vocal swoop into the hook announces that ‘The Voice of Rock’ is back.
‘Resonate’ reveals more with each play as there’s so much going on. From Chad Smith’s bombastic drums on the opening title track - albeit Pontus Engborg puts in the main shift on the album – through Hughes’s pulsating bass to Soren Andersen’s distorted (but clean) guitar lines and the album’s overall enveloping sound, this is hard rock as it was meant to be.
That said, it’s also an album that belatedly leaves the heavy rock template at the three- quarter mark, as it goes in search of other musical directions.
Indeed by the extended blow of ‘How Long’, the heavy approach seems to have run it’s course, as keyboard player Lachy Doley adds a mid-number keyboard break that compared to his impressive riffing on ‘Steady’ sounds like a filler solo.
But there’s plenty of good stuff leading up that point. Hughes adds a trademark vocal on both the booming title track and the hook of ‘My Town’.
He’s also at his most expansive on the catchy ‘Let It Shine’, the Deep Purple influenced ‘Steady’ and the soulful ‘When I Fall’. And it’s on these highlights that the band members complete a reverse arc from the opening bluster to later more restrained approach that allows them to broaden their musical palette.

Hughes vocal performance, which, just like his ripping bass lines, is the cornerstone of a big sounding album. He confidently brings his full range to bear on a wide variety of material that showcases his ability to rock as well as nuance some introspective emotive moments
On ‘Let It Shine’ we have to briefly plough through rumbling bass lines and distorted guitar tones before an uplifting hook resolution that stays long in the memory. Soren Andersen’s subsequent gnawing guitar break drags us over the coals.
This track is the moment when the band is in perfect synchronicity as it counterbalances Hughes’s hard rock credentials with his soulful style vocals.
"Resonate" certainly lives up to its name. It’s an album sculpted by layered parts and shaped by a huge wall of sound that accommodates every element of Glenn’s bristling persona. He’s an indefatigable performer who rocks, grooves and gets just as soulful in the studio as he does while treading the boards.
Ultimately Glenn Hughes imbues the hard rock template with sundry possibilities, but just like a stick of rock the end result comes stamped all the way through with his unique DNA.