Demontuary - Of The Fallen Years 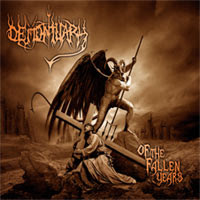 Of the Fallen Years, is a collection of rare early material by the American black metal band now known as Demontuary. Unlike so many of the other bands of the same genre from this time, Demontuary skipped the clichéd trappings of overly satanic themes and stripped back productions, in favor of battle themed songs and a well polished and very aggressive sound. These recording were made between 1997 and 1999, and you can hear just how much the bands songwriting and musicianship developed during that period.
The songs are very well structured and although I’m no fan of growly shouty vocals (that come as part and parcel of this genre unfortunately),front man Crom does a pretty good job.
There are some great symphonic metal moments here too, and the keyboards really do add a dimension to the songs, adding a little atmosphere and softening the relentless battering that the band dish out.
This is album is a great collection of tracks , showcasing a band that many may have missed or overlooked, so if you’re a fan of the genre check these guys out, there’s some good stuff on here!
Standout tracks include, Infinite Twighlight and For Those Who Died.