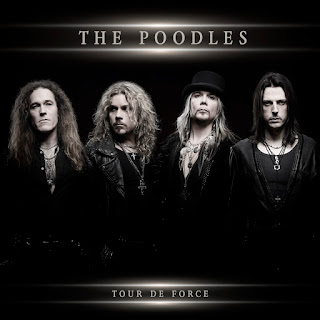 
Tour De Force is the fifth album to be released by Swedens daftest named band, The Poodles.

The Poodles like to play for pure enjoyment, throwing reasonably basic party rock anthems at you, full of riffs and melodies. The formula has always been rather simple - even if the songs are not - for The Poodles: big rock groove, strong melodies, hooks in lyrics & arrangements and ripping guitar solos wrapped up in metal edged melodic hard rock. If it ain't broke don't fix it. Period.

If you've ever heard a Poodles album before then yoiu should pretty much know what to expect. "Tour De Force" will not bring many surprises to the table. What you're looking for is an album that is strong enough to carry the Poodles name, and this one certainly does that job well.
"Misery Loves Company" is up first and it's a fantastic way to kick things off, and if you are new to The Poodles’ charm then you will be in for a treat with this barnstormer of an opener which is part D-A-D part Motley Crue, but 100% Poodle rock. In saying this though the sound of the whole record is very much of that late '80s / early '90s Scandinavian scene where acts such as Treat and Swiss Gotthard all flourished in, however the sound is mixed in with a healthy dose of the current music scene to make things contemporary.

The catchiness follows with the fun, tongue in cheek "Shut Up" and the bouncing "Happily Ever After". "Viva Democracy" in particular is a thumping heavy groove rocker (by The Poodles standards anyway), lyrically tackling the current dire situation the world finds itself in.
"Going Down" meanwhile reminds me of some of the aforementioned early '90s European hard rock bands attempts to harden up their sound but here it sounds and feels like the right thing for the band to be doing, rather than simply being a forced attempt to move with the times.
"Tour De Force" continues rocking in good way with consistent tunes in "Going Down", "Kings & Fools", "Now Is The Time" and "Miracle", complete with some eighties cowbell. Then "40 Days and 40 Nights" finds them settling down with a more commercial, poppy radio flair.
The Poodles have really done themselves proud with their fifth album "Tour De Force", a CD faithful to the band's trademarks: powerful guitars and pumping bass/drums combined with sweet melodies and some equally harmonic vocals that – all of them – eventually build a sold strong record that jumps from Scandi Melodic Rock to powerful Hard Rock and vice versa.

Add to this the songs which have their own spirit enhanced by a punchy production and what you get is a rocking album that shall sound appealing, as the rest of their discography, to any fan of the genre.

Posted by The Sinister Angels realm at 21:58