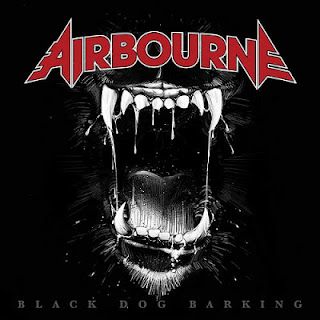 "Australians AIRBOURNE are supposedly the next best thing to AC/DC. Having never admitted to reinventing Angus and the band, although riffs and performances come more than close, Airbourne do one thing very well and that is to have you pumping your fist with classic riffs. Their previous two releases were OK, but nothing special for me.
However, the band's new album "Black Dog Barking" is a more polished affair both in playing & production, and even though is loaded with clichés and riffs you've heard somewhere before, now I finally can dig Airbourne's style and enjoy the entire listening of one of their CDs.
"Black Dog Barking" is balls to the wall kick ass boogie rock 'n roll, a one-dimensional but heavy-duty batch of songs delivered with ageless and tireless uniformity. But what consistently saves the Warrnambool quartet is the electrifying verve with which they attack their joyously simplistic songs, and this time, helped by a more clean, and as said, polished production.
Huge riffage collide with fun tales of partying, chicks and the noble art of kicking ass come through all these hot rockers.
From self-explanatory opener "Ready To Rock" to the snarling and snotty title track, this demands to be played at life-threatening volume while you drink a cold beer with your friends. There's some variation and a clear indication of the more refined, radio friendly approach in "Animalize" (with a Def Leppard smell), but basically the full album is a high energy, hard-boggie-rock fueled stomper.
"Black Dog Barking" it's only rock 'n roll, pure testosterone party music plenty of booze and immense swagger.
Call it more of the same, AC/DC clones or whatever, but it freakin' rocks.
Load up a case of your favorite brew, grab your gal and gang, roll the top down, put the pedal to the medal, and hit the beach. That's the only intention of Airbourne, and this album does the job.

Let there be Rock.

Posted by The Sinister Angels realm at 22:40