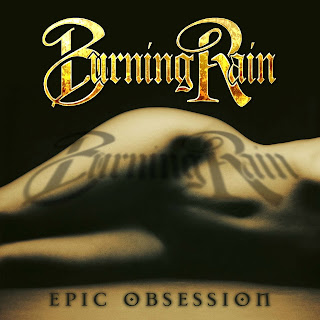 The following are not my words by I couldn't agree with them any more, so I replicate them here -

"Guitarist extraordinaire Doug Aldrich is mostly known for his time as member in Dio's band and current employers Whitesnake, but he'd been in the music business for more than thirty-five years recording for other artists or as part of Lion (Transformers The Movie theme song) and Bad Moon Rising.
In the second half of the nineties Aldrich founded BURNING RAIN, releasing two stupendous bluesy melodic hard rock albums. Then the band was put on hold as he went on to fame and fortune with Ronnie and later the 'Snakes.
But now, after 13 years, tempted by Frontiers Records Doug is back with Burning Rain presenting the long awaited third release called "Epic Obsession".
This new Burning Rain incarnation features original singer and Aldrich's long time friend Keith St. John, but the duo recruited a completely new rhythm section in Sean McNabb (Dokken, Quiet Riot, XYZ) on bass guitar and backing vocals along with Matt Starr from Ace Frehley band on drums. The album does also features several guest musicians, the most notable being Brian Tichy and Jimmy D'Anda (Bullet Boys).
"Epic Obsession" captures all the elements that built Burning Rain's reputation: well worked riffs, virtuoso solos, a melodic voice and a bright sound. Like a good wine that remained some time in the cellar, it's a pleasure to listen to this record.
Unsurprisingly, there's a healthy amount of modern day Whitesnake, Led Zepp, Coverdale/Page, classic US Hard Rock and '80s like acoustic power ballads - the comfort zone of the foursome crew, and it sounds amazing. Keith St. John’s vocals are in top form, a mix of Coverdale and Plant but with an American touch, and Aldrich is ripping the hell of his Les Paul with melodious, punchy riffs and solos.
Opening with the groovy "Sweet Little Baby Thing" this is a great little rocker to kick start proceedings. "The Cure" meanwhile has an opening riff to die for and Aldrich very rarely gets to show off his chops off like he does here. This is the kind of song that Coverdale should be doing right now, but to be truthful I doubt his voice could pull it off.
"Till You Die" begins with a Nuno Bettencourt-esque intro before settling into a Bulletboys/early Van Halen groove, followed by the first of the slower songs, "Heaven Gets Me By", which in this case features the long forgotten hair metal balladesque with natural drums / percussions and electric & acoustic guitars in the first House Of Lords vein.
"Our Time Is Gonna Come" is a killer midtempo driven by a moster groove, the melodic "Too Hard to Break" flirts with American AOR (some Foreigner here), while "Ride the Monkey" echoes modern day Whitesnake.
There are a couple of bonus tracks as well, with the Burning Rain cover of Led Zeppelin's classic "Kashmir" (nicely done) and an acoustic version of "Heaven Gets Me By".
"Epic Obsession" is a solid third effort by Burning Rain. There's definitely a particular energy and one can feel that Doug and Keith are happy to work together again. Oh, and they were very productive: there are 73 minutes of music in total.

This is somehow sophisticated (Melodic) Hard Rock music. Burning Rain songs are not in the average bluesy rockin' style, it's not that easy. For example, the choruses won't be repeated on and on, and as a result not many tracks remain in the head after listening only once. There's more meat here. Several plays reveals how rich are these compositions and all their subtleties, and you realize how good they are."


Posted by The Sinister Angels realm at 19:37