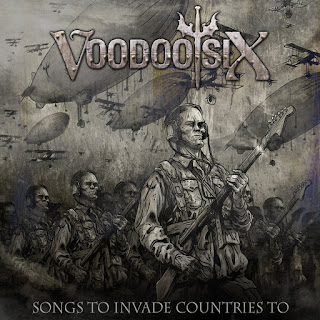 Songs To Invade Countries Too is Voodoo Six's third album and the follow up to 2011's excelent Falling Knives Ep. Inspired by classic British traditional bluesy Hard Rock and boasting the raw energy of '70s / '80s bands with modern stylings thrown in, Voodoo Six make for one helluva band!.

Songs To Invade Countries Too, opens up with the hard rocking stomper "Fallen Knives" a song that is driven along by a catchy groove and distinctive bass line. Then the guitar that joins in drags you into the album as soon as it starts, you have no choice but to continue to listen. One thing that you instantly notice is just how well crafted these songs are. There seems to be a lot of depth and thought involved within the song structures in this album, and you can hear the band trying to expand their traditional territories giving you pleasant surprises throughout.
This become even more evident on third track "Lead Me On" which is a quite elaborated ballad / midtempo tune complete with strings subtly meandering away in the background. Lots of sweet guitar sounds coming from both guitarists with a simple, catchy chorus and nice phrasing from Purdie. The song ends with a nice cello on pair with clean guitars.
"Sink Or Swim" rocks again in a traditional way, but then in "You Don't Know" Voodoo Six go for a more heavy funky groove which is very catchy and surely a future live favorite. The intro of "Your Way" starts with a slightly southern feel but soon changes into a different kind of animal. This one has a lot of angry gravely vocals, nice flowing heavy riffs, thunderous drumming and a meaty guitar solo to boot.
"Sharp Sand" is another clattering mini-anthem, that was debuted on 2011's EP, a song that gallops into the room on the twin guitar attack of Matt Pearce and Chris Jones, and in Joe Lazarus the band clearly have a warhorse of a drummer whose style perfectly suits this bruising style of hard rock.

"Stop" is one of the more interesting tracks in this recording. It starts with a lot of heavy bass and funky groove (Tony Newton is a noteworthy bass player who adds extra weight to the album) mixed with classic rocking riffs which almost seem a bit jazzy in places. The bridge had gentle backing ooooh vocals which to me was a nice little element to throw in. There is bits and pieces mixed into this album that shows V6's intentions to evolve musically.
The song immediately after, titled "Brick Wall", is another highlight. A classic bluesy hard rocker where all the musicians get carried away through a really live vibe. Another muscular rocker featuring driving guitars and solid drums with a strong seventies feel to the proceedings.
The album finishes in a pedal-to-the-metal fashion with "Higher Ground", a simple yet huge hard rock stomper sporting a smokin' solo. Purdie mesmerises with his raucous vocals and although he does make it seem effortless, it's clear a lot of effort was put in creating this recording and it does show.

With Songs To Invade Countries Too, Voodoo Six show how they have become a mature Hard Rock monster, capable of  delivering a bunch of groovy, punchy, unstoppable rockin' tunes with a traditional feeling whilst still managing to obtain a modern sound that allows it to fit in with the 21st century's rock and metal scene.