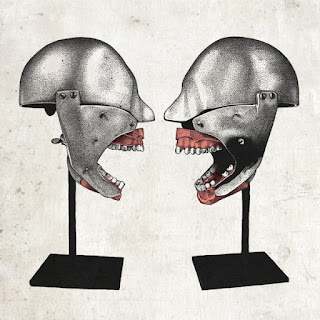 OK so I have to admit to the shame of despite knowing of the bands existence for many years, mainly through their connections with Eureka Machines main man, Chris Catalyst, up until know I had never actually heard any of their music. Damn what a mistake!
After hearing this album I quickly wanted to hear more from their rather extensive back catalogue (well these guys have been around since the late 1990's!) and they have quickly become one of my new favourite bands!
There is a definite quirkyness to this band and their music, which puts them right up my street. Kind of a early eighties Alice Cooper meets Frank Zappa meets Adam Ant meets The Cardiacs meets Random John Poole, a truly magnificant combination!
All twelve songs are superbly written and executed to perfection which when combined with a sublime production makes for a great sounding album. I swear that everyone should own at least one Scaramanga Six album.
Standout tracks? Well as I said all twelve are great songs but if I had to choose three I would have to go for, The Spider, It's Just A Matter Of Time and Blunt Force Trauma

Posted by The Sinister Angels realm at 16:16