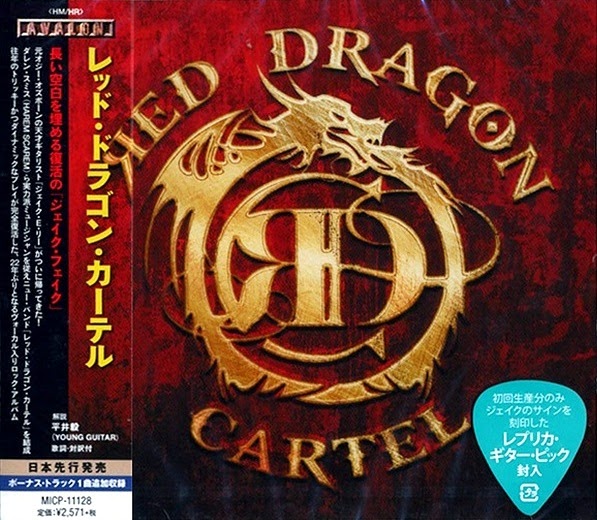 Guitar legend Jake E. Lee, the man behind Badlands and one of Ozzy Osbourne’s most famous albums, Bark At The Moon, is back after almost two decades out of the spotlight with his new band RED DRAGON CARTEL, and their self-titled debut to be released by Frontiers Records.

Clearly standing out from his countless contemporaries, Jake E. Lee first rose to international prominence as Ozzy Osbourne's sideman during the raucous '80s hard rock movement. Lee's signature guitar work and songwriting contributions on such million-selling albums as Bark At The Moon and The Ultimate Sin helped further to cement Osbourne's credibility during that decade, while Lee, himself, soared into the stratosphere as rock's latest guitar hero.
Following his tenure with Ozzy, Lee went on to create arguably his best and most compelling music in the late '80s and early '90s with the short-lived hard blues based outfit Badlands with short term former Black Sabbath vocalist ray Gillan. In recent years, the reclusive icon has resurfaced only occasionally appearing on various tribute records and solo releases.
In 2014, the famed guitarist returns with his new project, Red Dragon Cartel.
Recorded at the Hideout Recording Studio in Las Vegas, the self-titled debut from Red Dragon Cartel was produced by Lee and bassist Ronnie Mancuso (Beggars and Thieves), then mixed and mastered by Kevin Churko (Hinder, Ozzy). The band is completed with front man Darren James Smith and drummer Jonas Fairley.
However, the recording session was also gifted with some guest talent including singers Paul Di’Anno (ex-Iron Maiden), Robin Zander of Cheap Trick, as well as females Sass Jordan and Maria Brink (In This Moment), and Five Finger Death Punch’s Jeremy Spencer adding vocals.
And how do Red Dragon Cartel sound?
Simply put, pretty damn fine!
Red Dragon Cartel's sound is generally straight up melodic heavy rock with a modern tone, The music being driven by Lee's wall of riffage and wicked guitar solos. Additionally, underneath all this is some serious groove getting your toe tapping, while you're banging your head.
Perhaps the only Ozzy-like track on the disc is opener and lead single "Deceived" (a highlight), which possesses a no-holds-barred Bark At The Moon melodic energy. You really could imagine Ozzy singing the lead on this one! Paired together with "Shout It Out", these two hooky, guitar-driven groove monsters make for a powerful pair of openers. Plus Shout It Out has a real modern singalong feel to it that just makes it irresistible.
But even if the album revolves around Jake E. Lee’s endless talent, this is no guitarists solo album and it proves interesting to see how each of the guest artists are able to somehow slice off a bit of the Lee pie to showcase their wares. For instance, Zander on the track "Feeder" shines with an almost psychedelic feel and Maria Brink provides a Joan Jett-like moment that is a nice change up on "Big Mouth".
Haunting and melodic, "Fall From The Sky" is another stand-out, as is the bona fide pedal-to-the (old school) metal nugget "Wasted" featuring first Iron Maiden vocalist Paul Di’Anno.
"Fall From the Sky" is fantastic ballad with superb instrumentation, centred on a strummed guitar pattern while vocalist Smith shines and gives his most passionate performance.
Another power point, "War Machine", lies stylistically somewhere between classic Black Sabbath and modern metal. Additionally, Sass Jordan's guest vocal on "Redeem Me" helps it to stand out from the rest of the hard-hitting pack as a straight-up and gritty blues rocker - one that's fabulously reminiscent of Badlands.
However, Lee's most vicious and enticing riffs (possibly) ever are heard on "Slave", which is another highlight here. You can hear a terrific palm muted fast picked riff that blends into an atmospheric verse before slamming into a fist-pumping shout along chorus.
Red Dragon Cartel's self-titled debut record is an impressive amalgam of Lee’s past output mixed with a modern spin. Blues inspired killer riff driven hard rock with melodic vocals is still the blueprint that Jake Lee works too. Great musicianship, asce production and some cracking songs!