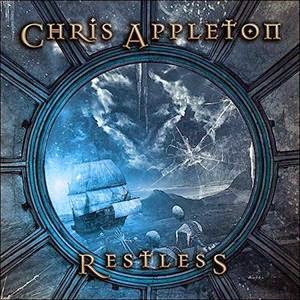 Chris Appleton, lead vocalist with UK metal bands Absolva, Fury UK, and the lead guitarist with former Wolfsbane/Iron Maiden front man Blaze Bayley’s touring band, releases his debut solo album in the form of Restless.
Chris has enlisted the help of his brother Luke (Fury UK / Iced Earth) and Belgian singer Wizz Wizzard for the album, with the later providing backing vocals on several tracks as well as sharing lead vocals on Restless. Both of whom will be helping to support Chris on a short tour to promote the album.
The album has a rather raw feel to it, partly due to the fact that it was recorded in analogue, almost giving it a feel of a good demo in places but that just adds to the appeal, as over producing an acoustic album is a sure fire way to kill any feel that's there within the songs. As can be seen from the track listing above, the album contains three covers, two tracks that Chris was heavily involved with in the first place being covers of his own songs, and a wondrous rendition of the Ozzy Osbourne classic, Mama I'm Comin' Home.
Album opener Seafarer has a rather epic feel to it, with Chis and Wizz trading vocal lines a great song that sets the general tone for what is to follow. Crazyhead could be worked up in to a great full blown Absolva track with its hammered on riff. God this song sounds awesome as an acoustic track, with a full blown electric set up behind it, well damn that's all that I can say!
No Tomorrow is simply a beautiful song.
How Will I Feel When You're Gone, is something special, the opening riff sounding really familiar for some reason, but it is a really great song.
Title track, Restless, an instrumental, and very much a guitarists track, allowing Chris to show case his technique and virtuoso ability. It would also be interesting to hear this track worked up into a full blown electric affair!
Its great to hear acoustic versions of Only When its Over and I See Red, adding another dimension to two great songs.
Wonders Of The World, with its piano intro is another fine example of Chris at his best, sensitive and touching with elements of power throughout.
Mama I'm Comin' Home is simply sublime.
A great album well worth checking out!