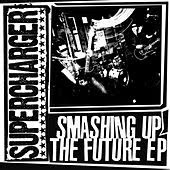 Now this EP has been out for a while now, it was released in early December 2008 but don't let that put you off. Let me introduce the band to those of you who may not have a clue as to who they are. Supercharger are a four piece rock band based in Newcastle Upon Tyne, England, and were born out of the ashes of Runt (UK) who called it a day in late 2007 and are lead by Nick Parsons (Whatever / The Almighty). The band have a rock / punk / metal sound which I can best describe as the perfect blending of The Wildhearts with The Almighty!

You get 4 tracks here, ' Lawyers and Locksmiths', 'Undone', 'Different Kind Of Low', and Jekyll and Hyde'.

'Lawyers and Locksmiths' opens up this ep with just the perfect balance of tempo, aggression and melody, really getting things off to a great start, 'Undone' follows, which is slightly heavier, with some crunching guitars but this song really shows The Wildhearts influences in my opinion as Ginger himself could have written this one with its tempo changes and mid section, in fact it also brings to mind Nick's former band 'Whatever'.

Then we get 'Different Kind Of Low', which again could have been penned by the Ginger one himself, its an up tempo punk track with a great melodic chorus, a brilliant song!

'Jekyll and Hyde' rounds up this ep and is another fine track. If you liked bands like The Wildhearts, The Almighty and Whatever in the mid nineties then you're going to love this ep, you really should check these guys out!