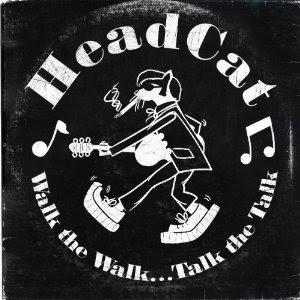 "The Head Cat is an American rockabilly supergroup formed by vocalist Lemmy (of Motörhead), drummer Slim Jim Phantom (of The Stray Cats) and guitarist Danny B. Harvey (of Lonesome Spurs and The Rockats).
Head Cat was formed after recording the Elvis Presley tribute album Swing Cats, A Special Tribute to Elvis in 2000 to which the future band-mates all contributed. After recordings were finished they stayed at the studio and Lemmy picked up an acoustic guitar and started playing some of his old favorite songs by Johnny Cash, Buddy Holly and Eddie Cochran.[1] The rest of the guys knew them all and joined in.[2] The name of the band was created by combining the names Motörhead, The Stray Cats and 13 Cats, which resulted in The Head Cat, similar to what Lemmy did in 1980 with Headgirl, a collaboration between Motörhead and Girlschool."
Walk The Walk . . . talk the Talk is the bands second album, the first one being released some eleven years ago, (although it was re released in 2006)and its a corker!
Its great hearing Lemmy sing his way through these songs, and this different style really suites him too. I'm loving every track here, not a duff track in sight.
This album is fantastic, just do yourself a favour and check it out!