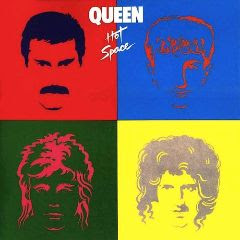 Hot Space, originally released back in 1982 and arguably Queens least popular album, and with understanble reasons. Hot Space saw Queen in effect turn their back on their hard rock roots and completly embrace the disco pop sound that was popular at the time. saying that there are a few gems on here still, like Under Pressure, which features the mighty David Bowie on co-lead vocals. Again the remastering is excellent, but this time the bonus tracks are a tad disappointing in my opinion. We get a few live tracks, an excellent B-side, and a single remix, yet there is so much more the band could have put on here. To start with the entire album exists in demo form, with notable differences, mainly being the tracks having a harder rocky sound, plus there is the demo of Cool Cat which also featured vocals again from David Bowie, and then there is the demo of Under Pressure, without David Bowie, all noticable by there abscence.
An un popular album with a dissappointing selection of bonus material.
Sorry, again for completists only.