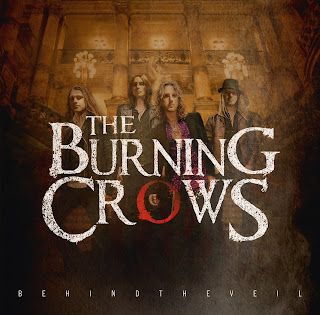 THE BURNING CROWS hailing from Norwich (UK) release their debut full length CD in the form of "Behind The Veil".
Britain has a long tradition producing bands with a unique taste, it's like a touch of class unmatched elsewhere, and that's something The Burning Crows have inherited. Regarded by the press and a growing fan base as one of most brilliant Classic Hard Rock promises from the isles, the guys have acquired their reputation in the good old way, from word of mouth and delivering the goods on stage.
All these happenings brought the attention of producer by Nick Brine, who has worked with The Darkness, Bruce Springsteen and Oasis to name a few, to produce and mix the first EP and now "Behind The Veil" as well. And with a guest appearance by Keith Weir (The Quireboys, Def Leppard) on keyboards, it seems that some of Rock's biggest names are starting to join the ever growing queue to get behind the band.
Kicking off with a pair of up tempo rockers in "High" and "All The Way" it is clear that The Burning Crows have channeled the energy, swagger and sheer adrenalin of their live performance into the studio. Driven classic guitars, tight rhythm section, high end vocals and tremendous melodies but with a chopping attack.
Frontman Whippz has the voice to match the outrageous personality and charisma, supported by an image that is straight from the soaked heyday of the Sunset Strip. Lance Daniels (guitars), Will Lockett (bass) and Chris Chapman (drums) complete the line-up and the vibe on "Behind the Veil" suggests these guys are a tight band of brothers that feed off each other's adrenalin to deliver an album of kick ass classic hard rock and roll.
The mid tempo pace changer "Time" breaks things up with a its Bon Jovi alike guitar work and choruses, while on follower "Fallin´" there is blooming catchiness with a highly oriented '80s driven chorus, and next "So Wrong" (one of my favourites) mixes some tasty licks with the guitars responding to each other during the solo in classy way.
When they drop the pace in "Here I Am" the results are no less impressive. The guys add acoustic guitars and serve up the traditional ballad complete with strings and ethereal background vocals. Whippz leads are soulful and heartfelt taking it down in the Steven Tyler lane.
At the other end of the scale is "The Queen", a simple yet highly effective classic rocker that shows The Burning Crows at their best. "Devil May Care" is another charmer with impressive guitaring while the "All The Way" heads up strong, letting the good times roll with a lively vibe.
Title track "Behind The Veil" is an energetic charger with quality melodies where Daniels is really let of the leash to provide some fiery riffs to go with the insistently catchy chorus, same with the mid-tempo beast "Best Damn Everything", plenty of melodious riffage.
If you get the CD (Digipack) version of the album you have two bonus tracks; "Going Down" rocks with contagious swagger and once again, this solidly crafted and hook-laden affair reveals Whippz's voice to be an aptly suited weapon. The other, "Best Damn Everything", is the most furious of the lot, a straight ahead hard rock the likes of UFO or Bad Company might produce, and has everything you want in this type of band with each member stepping up to lay down some great sounds.
The Burning Crows take the best of classic British hard rock and blend it with its American counterpart from late Eighties Sunset Strip, tossing-in a little bluesy spice to boot. There are a lot of bands out there at the moment doing this type of rock, but these young guys own a different touch.
"Behind The Veil" features 14 songs clocking over an hour, a rather ambitious for a debut and means there better be some significant consistency across the album. Frankly, The Burning Crows pull it off. It might be presumptuous to say that every song is killer, but they never miss the mark.
There's tons of 'burning' fire and heart in these hot-to-trot rockers full of energy to convince the most demanding Classic Rock / Hard Rock fans out there, cooked with a crisp and organic production.

Posted by The Sinister Angels realm at 12:33

Email ThisBlogThis!Share to TwitterShare to FacebookShare to Pinterest
Labels: Behind The Veil, Classic Rock, Hard Rock, The Burning Crows