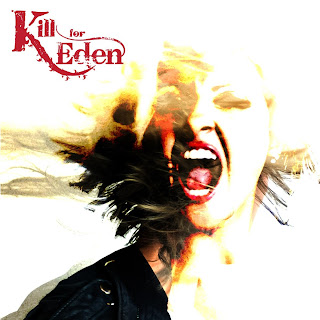 KILL FOR EDEN is a new UK-based band but formed by a truly international line-up from Lyla D’Souza (Sydney), Andrea Basiola (Italy) and Londoner Dave Garfield Bown, along with Mike McGuinness on bass and drummer
Wally Miroshnikov, together they have infused all their influences to produce an awe inspiring self-titled debut release.
Built on massive melodies and huge hooks coupled with charismatic choruses, Kill For Eden's energetic style blends the hard rockin' groove of The Cult circa Sonic Temple with the Rock&pop sensibility of Blondie. Chuck in a rocking Pat Benatar and you can see where the healthy references come from.

What I liked about Kill For Eden at first place is their uncompromising delivery. They're releasing this debut by themselves, and they do what they want in their own way.
The music business is quite brutal most the time, with the only fast track options generally open to those who have no self worth and little talent willing to sell their souls and other parts of their bodies to a suit sucking on a big fat cigar. Any band with original ideas practising in back rooms has a mountain to climb, and a shed load of luck and hard graft are basic starting points before there is any chance of hitting the ‘big’ time.
Sadly, history shows that if you are a female fronted rock band you can multiply that factor again by a whole lot more and the intensity and need for that special quality to stand out and be different is magnified ten fold. Just check the band list for your favourite festival this summer and how many of them have a female leading the front line?
As I said it’s brutal people, but real exceptional talent and innovative use of the grey matter will find a following, well you would hope so anyway.

Kill For Eden could just be one of those exceptional bands, as they have the talent in abundance, and in Lyla D’Souza they also have a front woman who not only looks the part but has a voice that stands out from the crowd of pretenders. Her technical and emotional range adds depth to all the material here and confidently tackles top end hard rock, power rock, intimate rock&pop and all shades in between – sometimes in the same track.
It’s not all just about the vocals, though. Basioli’s lead guitar muscles into the limelight plenty, and the rhythm six-string work together with the dynamic bass/drum interplay drive these tunes into a great feeling.
The album starts via the most immediate track called "Kerosene (Radio Mix)" with an ear pleasing driving guitar riff and a rumbling bass line upon which the powerful vocals of Lyla D’Souza rise strongly, and here in lies the special unique selling point that Kill For Eden have in their repertoire. This version has been re-worked with an obvious commercial intention, as the original (placed at the end) is more rough and sharp. Both work to me.
The heavy funk groove and vibe continues on "Untouchables" with a big chorus and rhythmic guitar work whilst "Beige" further continues this positive trend. "Over and Over" is also built for the airwaves with its catchiness.
Don’t be fooled though. There is some heavier and more challenging material here too.
"Living On Mars" features a skuzzy, gutteral riff before the chorus lifts the track and a change of pace injects a shot of adrenaline. "Ned" chucks out a mean growl and weaves a narrative about Australia’s most famous outlaw.
"The Evil That Men Do" is amongst the strongest tracks with an insistent, nagging guitar and keyboard riff that rises into a powerhouse chorus. D’Souza goes for the jugular and stays on the right side of the tuneful/shouty divide at the business end.
"Slip Away" for me is a radio hit single in waiting, with a modern but at the same time classic rock melody full of groove and titillating amp-valvular guitars, providing a demonstration of all that is good about Kill for Eden in a one tremendous song.
The stomping hard rocker "The Truth" takes a look back to late seventies Heart, "Alone With My Demons" adds some bluesy spice, and "Little Wizard" brings the good ol' 'American' The Cult to the table, just with female lungs.
There also a couple of tasty ballads that showcase Lyla's vocal gymnastics. "Stalemate" is perhaps a touch formulaic, but "Fate Insists" pulls out all the dramatic stops.

Kill For Eden is one of the most genuine, impressive female fronted rock bands appeared in a long time.
However the consistency in their debut is not just in D’Souza’s powerhouse vocals but also in the quality of song structure and musicianship. The rhythm section creates a groovy foundation where the complete guitar work dynamically change gear all the time with the vocal arrangements controlling the intensity and delivery, resulting in some memorable killer songs.
Kill For Eden achieve something which, to my mind, is pretty hard to find; they manage to hide some scorching guitar-based hard rock within an extremely radio-friendly format, a feat not seen too-often these days. The majority of the tracks are around 4 minutes long and fit everything they need to in that time with nothing left on the side lines.
Production, handled by guitarists Basiola and band mastermind Dave Garfield could be much more polished, but I prefer this crunching delivery for this type of material than the overwashed sound a major label would have ordered. They go indie, and I like this way, remaining in the radio-friendly category without compromising the guitar-driven awesomeness that makes them stand out.
Good things are surely just around the corner for this lot, meanwhile their debut is strongly recommended.