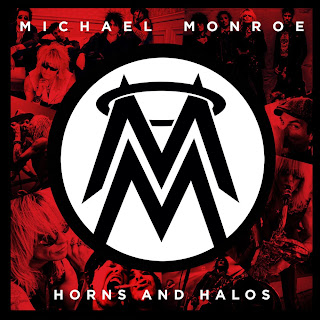 Michael Monroe returns with Horns And Halos, the follow up to 2011's  (Ginger Wildheart penned) album of the year, Sensory Overdrive, this time without the mighty Ginger at the song writing helm. Can it love up to its predecessor? Oh Hell Yes it can!!
this album is pure Michael Monroe, combining elements from Hanoi Rocks, Demolition 23 and his previous solo material, mixing them up and adding a good dose of here and now! The result, one hell of an album.

I may not have written the following review but I couldn't agree with what it says any more. (All credit to the original reviewer!)

"Founding member of Hanoi Rocks - the band that essentially started the Hollywood glam rock scene and inspired bands like Guns 'N Roses, Poison and Motley Crue - since many years ago MICHAEL MONROE embarked on an solid solo career, frequently guesting on now-classic albums and performing with many other legends in rock music.
"Horns And Halos" is Michael Monroe's band new release which takes life truly by the horns and delivers a piece of glammy hard rock music that is full on with intensity, charisma and drive.
"TNT Diet" is the first track from 'Horns And Halos', a fast-paced rockin' energetic tune, complete with signature horn honkin' fills and plenty of attitude. It's a good, solid start, showing a more polished approach in sound than on the previous album which I like a lot.
"Ballad Of The East Side" is another triumphant blast of glamorous rock and roll, and the undisputed kings of glunk are at their best singing about something they know first-hand and this happens to be about all things after midnight in the Big Apple as it was and not as it is now.
"Eighteen Angels" has sleaze written all over it: it's got groove, hard funk and sharp guitars, a lethal combination, followed by "Saturday Night Special", a more up-tempo rocker with a great breakdown beat towards the rip snorting guitar solo. A track wonderfully reminiscent of earlier Monroe works.
Next up we have the hard rocking title track "Horns And Halos" that's brooding on a jagged riff before breaking out with a huge chorus that jabs the listener in the throat and demands you to sing-along. This rough yet polished hard rock cut is one of my favorites.
"Child Of The Revolution" is pure rock 'n roll from the subtle hand claps to the big gang vocal chorus and the wicked melody, to my ears recalling some Hanoi Rocks, Clash and even Blondie.
For album number two this band has only gone and gotten better, trading off one and other more freely as a unit it would seem.
So with eleven songs on offer (or thirteen on this deluxe version) by the time you get to "Soul Surrender" you’re taken on another twist and turn as the band go from all out punk hard rock to a poppy groove driven by a fat bass and a catchy chorus.
"Half The Way" once again reinforces the fact that Monroe & the band have really put the hours in on the writing front by mixing up the instruments with the harmonica and guitars trading well on around, it’s a really strong melody complemented by some superb backing vocals that elevate this tune as it gets stuck in your head.
Easing things back a little, next up is "Ritual" with Michael using his lower range for the verses but the temperature soon rises for the guitar solo and a haunting guitar line cuts through the song as it comes to the boil nicely.
Something else about this line up of the Michael Monroe band is that on ‘Horns And Halos’ there’s no track like the previous track, illustrating there are many strings to their collective bow. And to close the album off we return for some low down and dirty rock in "Hands Are Tied" as the boys get their groove on and take this baby home in triumphant style.
The bonus tracks really worth this Limited Deluxe edition, as the traditional '80s L.A. hardrocker "Happy Neverafter" is one of the best cuts of the entire disc, and the melodic "Don't Block The Sun" also recalls the Sunset Strip days with its swagger and fun rhythm.
Michael Monroe's "Horns And Halos" is not just the product of a life that has been lived or the fevered imagination of someone with great lyrical writing skills, it is has the hallmarks of a place, the one special location in which as rock music lovers we all dwell and take refuge in, be it a city or a venue. The album draws on that and gives Michael Monroe’s fans a pretty rocking sanctuary in which to share his music again.
To my ears this CD is truly far superior than the already really good previous effort, and sits among Monroe's best.
"Horns And Halos" possesses a swagger and an air of confidence that's missing from many of today's releases and is the perfect soundtrack to a scorching hot summer's day. So when you get this album make sure you crank the volume up for maximum effect and let the songs flow over you.
Very Recommended."

Posted by The Sinister Angels realm at 20:28