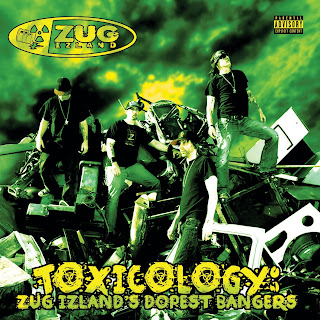 Zug Izland originally came about as a kind of side project of Insane Clown Posse's Violent J, when he wanted to put together a rock album. It quickly morphed into a fully fledged band in its own right with Syn taking control of lead vocal duties in place of Violent J (Although J did still write all the lyrics on the first album and can be heard providing backing vocals on most tracks as well as featuring heavily on some.
Toxicology is a sort of best of, ( kind of given away by the sub title....) featuring a selection of their best tracks (plus three new songs),  released via Psychopathic records now that they have re-signed with them.
To be fair the track listing is almost perfect, show casing the bands versitality and range from the out and out rap rock like "Fire",  and "Suicide", to the hip hop ish ballads like "Fly", to the rock ballads such as "Saved".A great selection. The three new tracks serve to remind fans of just what Zug Izland still have to offer.
Toxicology is a great introduction to a very promising band, well worth checking out!


Posted by The Sinister Angels realm at 19:49