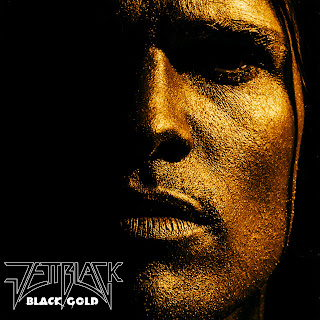 The awesome UK rockers Jettblack return with a stop gap release, that proves to be so much more, and a must have for all fans of both the band and hard rock music in general!

The following review may not have been written by me, but I couldn't agree much more if I tried!
(All credit to the original reviewer [unknown])

"The last CD from British hard rockers JETTBLACK was among the best 2012 albums for this blog staff and most specialised media. While preparing its successor, the guys are releasing today, August 19th, a selection of hard to find b-sides, unreleased & re-worked material entitled "Black Gold".
The 13-track collection includes fresh covers of three classic anthems; "Barracuda" (Ann Wilson's Heart), AC/DC's "Let Me Put My Love Into You" and "Name In Vain" (Motorhead cover), but also the original brand new acoustic song "Red Horizon" and many different versions from previous compositions.
Tipped to be appearing fully electrified on the next studio album, "Red Horizon" gives a fresh look into the advancement of the band's writing. Haunting, elegant, yet typically Jettblack it certainly makes keeping an eye on the future an easy job as the rest of the album tidies up the past.
Title track "Black Gold" (originally appeared on sophomore release 'Raining Rock') is presented in a revised, new edited version featuring the six strings of Damon Johnson (Black Star Riders) as guest on a hot solo.
Previously only available digitally, "Feel The Love" also has a guest star, this time Ian Paice of Deep Purple who swirls his sticks and offers up some classic beats to complement the hard rock rhythm. The other, "Weapon", weighs in at the heavier end of the Jettblack spectrum. It stomps like a wild stallion, kicking up dust with a stampede of power.
As does 'Fade Away', which rocks its way out of the shadows at the back of the vaults, shelved since the original sessions for 'Get Your Hands Dirty'. There's other digital-only tunes like the pleasant acoustics "Sunshine" and "Prison Of Love".

Much more than a mere compilation, "Black Gold" keeps the pot boiling for JettBlack's album number three (in the making) with a strong combination of hot electrics and sweet acoustics.
This release shows the full potential of an outfit that are getting more experienced and confident with each passing year; no need for gimmicks, these songs stand up for themselves.
Strongly Recommended."


Posted by The Sinister Angels realm at 20:14