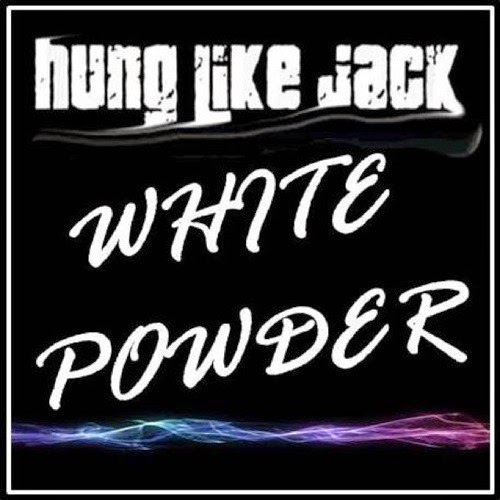 Hung like jack were formed back in 2007.in Darlington.(UK), when Tim Smith (Guitars) met up with J Tutin (Vocals) and Hakim (Bass)..The band advertised for a drummer and up steps Denz, hitting the sweet spot with his hard hitting beats and versatility. Four e.p's and a live disc."Arrested By Midnight" later the band split for a short period whilst the band members went their separate ways, that was up until around six months ago when they re-formed and recorded this their latest e.p. titled "White Powder".
Considering that Denz recently claimed that this e.p. was recorded very quickly and on a very limited budget its out standing. Title track white Powder starts things off in a high octane punk / alternative rock fused fashion. You can definitely hear the punk influences, and at a little under two minutes in length the song really does fly by, but the production is quite polished and really brings out the quality of both the performance and songwriting. A great start.
Next up is Ripe For Grieving, the longest of the three tracks on offer here, with a slightly slower tempo and some great atmospheric guitar work. Another great song that at times brings Nick Parsons Supercharger (UK) and Whatever to mind. Again a really great song.
Four Walls closes things out and its another really solid song.
In short the band sound really tight all over this Ep, yet fluid and relaxed enough to really capture that live feeling. All three songs are really solid, and if their strength and quality are anything to go by then I really cant wait for the album!
Personally I'm really glad these guys chose to reform, otherwise I would have sadly missed them, now to track down their back catalogue!