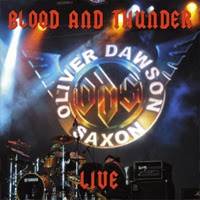 "OLIVER DAWSON SAXON took to the world stage in 2000 and have delivered since great music from the very guys who were the masters and originators of British NWOBHM.
Recorded on tour in Germany in 2013 “Blood & Thunder” showcases a band that over the past 14 years has been touring relentlessly, playing to audience’s small and large, clubs and festivals alike delivering hard rock music to their fans all over the world."

Blood & Thunder Live is a great live album representing the bands sound (as well as GRAHAM OLIVER and STEVE DAWSON'S illustrious back catalogue rather well..
We hear the band blasting their way through metal classics such as Everybody Up, Motorcycle Man, Strong Arm Of The Law, And The Band Played On as well as more epic tracks like Crusader.
This really is a great live album capturing a great band doing just what they do best!
Highly recommended

Posted by The Sinister Angels realm at 21:57