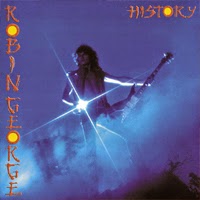 "ROBIN GEORGE’s first major release was “The History” 12inch EP in 1983. The single “Go Down Fighting” did really well. He and his band were gigging and were about to become the new TRAPEZE when DAVE HOLLAND had an offer he could not refuse and he joined JUDAS PRIEST. The label decided not to pick up its option on the album and the masters have sat in the vaults until recently when Robin remastered them for the digital age.
MALCOLM DOME back in 83 had heard the early album demos which had been recorded between 1979 and 1981 and he jumped at the opportunity to write the sleeve notes for this 2014 release.
On the track “Showdown” PHIL LYNOTT plays bass. Robin George has had a distinguished career over the past three decades, working with a succession of major names. “History” is not a nostalgia trip. It’s a lesson in music for everyone."

History is a great album showcasing just what might have been had history turned out just a little differently. Robin George really was on the edge of making a huge break through, but sadly it was not to be. this album finally gives music fans the chance to hear some real gems, songs like Too Late, Heartline,  Showdown (featuring Phil Lynott) and Go Down Fighting.
Fans of early Eighties melodic rock will absolutely love this album, hell fans of melodic rock will full stop.
Highly recommended

Posted by The Sinister Angels realm at 21:42