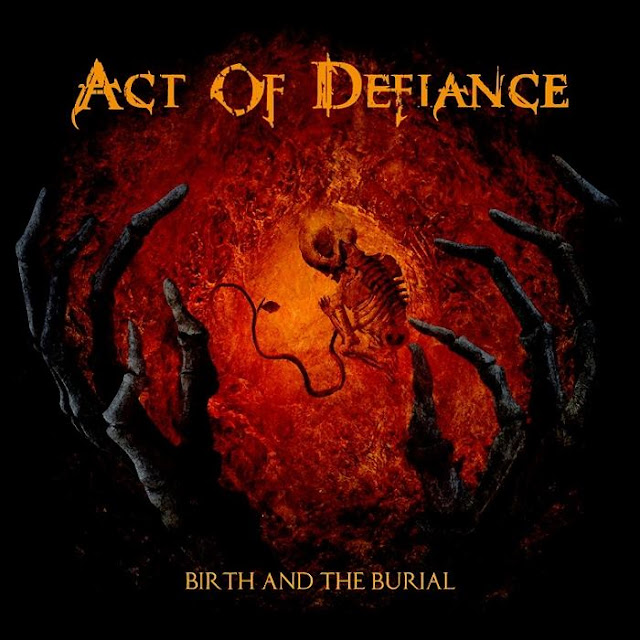 Birth and the Burial is the debut studio album by American heavy metal super group Act of Defiance. It was released on August 21, 2015 through Metal Blade Records.
Act of Defiance is an American extreme metal super group from Los Angeles, California, formed in 2014 by former Megadeth members Chris Broderick and Shawn Drover, former Scar the Martyr front man Henry Derek and Shadows Fall guitarist Matt Bachand.
With such  pedigree within its ranks you would expect the debut album from Act of Defiance to be something a little special, and that it is!
Opener 'Throwback' really sets the scene, pounding riffs and Derek's vocals set to tear your face off, a great start. 'Legion of Lies' follows, and is more of the same, although I have to be honest I could really see the legendary King Diamond providing a great vocal line for this song, but to be fair Derek does and bloody magnificent job himself!
'Refrain and Re-fracture' provides a little contrast to the proceedings with its acoustic intro before launching into a great Megadeth type of riff. Mustaine will  be jealous of this one, I'm certain.
'Dead Stare' is out and out thrash at its finest!
'Disastrophe' continues in the same vein as its predecessors whilst 'Poison Dream' opens up with a piano and Cello intro adding more texture to the song and album. 'Obey The Fallen' is probably the most commercially accessible track on offer here and is till a bloody fine piece of metal! 'Crimson Psalm' is another fine piece of metal that grinds along its groove whilst the albums closer, and title track, 'Birth and the Burial' is just brilliant.

In short, with Birth and the Burial, Act Of Defiance have produced the album that the four heavy weights of the thrash genre, Metallica, Megadeth, Slayer and Anthrax wish they were (and hope they are) still capable of!

Posted by The Sinister Angels realm at 21:23