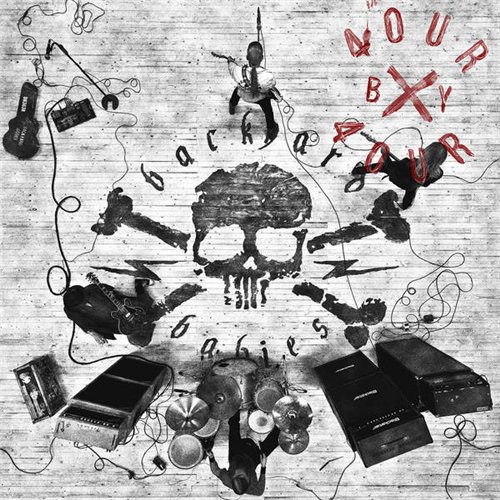 Swedish rockers return with a brand new album, "Four By Four", their first new studio album in five long years. "Formed in 1989, and with half a dozen studio albums to their name, the line-up of the band has never changed, and neither has the collective desire to claim a key and colourful chapter in the annals of rock ‘n’ roll." which is a pretty impressive claim to be able to make in todays ever changing revolving door environment of rock 'n' roll. One thing that has changed is that the bands sound has slowly matured and evolved over the years, especially during their recent five year hiatus, that saw various band members involved with various other projects, especially guitarist Dregen with his excellent solo album! So the guys now come back together and put out a rather excellent record in the form of "Four By Four", which see the bands sound slightly more polished than on previous releases, and maybe a maturity within the song writing that can only come with age.
The album explodes into the ears with the recently-released single “Th1rt3en Or Nothing”, which has a funky start and then sort of slides into a slow and groovy wall of sleazy swagger. The vocals are sneering, the guitars are wailing and I love the drum sound. This track kind of brings to mind some of the recent Sixx:AM and possibly even Slash releases, yet maintains the Backyard Babies own identity. Second track “I’m On My Way To Save Your Rock & Roll” is an instant classic. Its dirty riff boils over with attitude, something only Scandinavian bands seem to understand these days, and its sing-along chorus just bounces along, simply brilliant. “White Light District” continues in the same vein, keeping up the energy and swaggering into a potential live classic in my honest opinion.
There’s a total change of pace for “Bloody Tears”, which starts slowly with acoustics then morphs into a massive power ballad. This is an absolutely cracking song. Get your lighters ready for this one.
The album returns to the classic Backyard Babies sound for “Piracy” which is fast and fun, featuring some excellent harmony vocals. “Never Finish Anything” is a potential single too, with a more modern sound with Nicke and Dregen throwing some two-way vocals at each other in the catchy chorus. “Mirrors (Shall be Broken)” is another nice ballad with a more bluesy groove. Final track “Walls” is another interesting cut, slow, but there’s no ballad here. Instead a strong and dominant jazzy bass line that gives it a feel all of its own, and it then becomes an instrumental ending that wouldn’t be out of place as the theme for a Hammer House Of Horror film. There’s creaking doors, doomy guitars and even an evil cackle or two.
It seems that those years doing their other projects have enabled the Backyard Babies to come back with a sound that is stronger than ever.  "Four By Four" is close enough in style to satisfy their die-hard long-term fans but there’s also some interesting new directions to attract a new audience.
A good strong album from some long time favourites, well worth checking out.

Posted by The Sinister Angels realm at 13:07