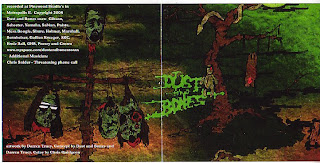 If you like classic dirty rock ‘n roll, Dust and Bones is the band for you!
Dust and Bones officially became a band in April, 2008. Band members include Nick Elmore (lead/backing vocals/harmonica) Sean Quidgeon (guitars/backing vocals), Jon “Big Dawg” Jackson (bass/lead/backing vocals) and Ryan Riggs (drums/backing vocals). These guys are perfectionists when it comes to blending their respective talents.
Dust and Bones are a classic rock band with a very hard edge. If your into the likes of Aerosmith, Buckcherry and Tesla then 'Voodoo' is bound to have something for you.
Great songs and great vocals, musically its hard rock with an alternative edge with the guitars chugging along, but it really works.
Stand out tracks included on this 13 track album have to include 'Feed My Disease', 'Dear Diary', 'Voodoo' and wickedly titled 'Whiskey Dick', which is funny as hell!

I love this album and am so happy that I Got to write this review, I just cant stop playing the lil bugger..lol