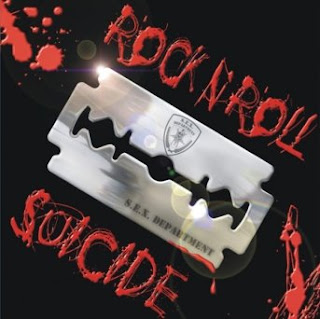 Italy’s glam sleeze rockers S.E.X. DEPARTMENT are BACK!!!
S.E.X. DEPARTMENT ‘s “Rock ‘n’ Roll Suicide” is the followup to their debut “Self Titled” CD that received rave reviews in the glam scene in 2007. S.E.X. DEPARTMENT recruited Pedro Ferreira the famed producer of the multi platinum THE DARKNESS. The album was recorded at the world famous Chapel Studios in Lincolnshire, UK ( Napalm Death, The Darkness, Simply Minds to name but a few).S.E.X. DEPARTMENT have managed to maintain that very Galm sound from their debut (similar to early Motley Crue if I had to describe it) just developed it a little more, allowing the songs to just grow a little.
The 9 tracks on offer here are pure glam gold, its like stepping back intime to the late 80's brilliant.
One song that really stood out for me was "Back In My Uniform", a ballad with a real bluesy inroduction that managed to give this hardened rocker goose bumps! To be honest for me its on the ballads that S.E.X. DEPARTMENT really shine, the other ballad being "Memories of the Sea".
The rest of the album is filled with mid tempo glam tracks, one up tempo track in Italian and a really bad disco remix of "S.E.X. DEPARTMENT".
On a whole a throw away party album, great if you like that kind of thing, luckily i still do!