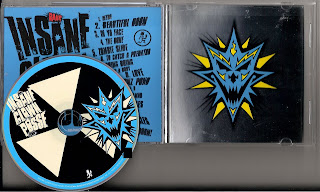 It is unfortunately rare that Insane Clown Posse get noticed by major corporate media outlets. So, we’re going to give them some love. Once considered in bad taste or just plain pointless, the bread winners of Psychopathic Records have developed a expansive fan cult for an underground artist. At their peak, the Insane Clown Posse released numerous albums in a semi-coherent storyline linked by “Joker’s Cards”. This series of seven “cards” introduced The Dark Carnival — a metaphorical representation of what could be purgatory -0 where one’s soul is judged before being sent to Heaven (Shangri-La) or Hell (Hell’s Pit). The most recent efforts by ICP (The Tempest, Psychopathics From Outer Space) hinted at the end of this story, but apparently they are returning to their roots with Bang! Pow! Boom!, scheduled for release on September 1st, 2009.
What does this mean for the fans known as “juggalos”? Based on the audio sample promoting the album (scroll down), it likely means more skits, haunted backdrops and a slew of new tracks guaranteed to please. It also means a pretty extensive, yet-to-be-announced North American tour. Finally, Bang! Pow! Boom! will be released in three different editions coded as red, green and blue — each of which with a different intro and bonus track.

Bang Pow Boom really is a return to form for the wicket clowns along with a return to the styles of music that made them (in)famous with Great Milenko, Rioddle bOx and Amazing Jeckle Bros!