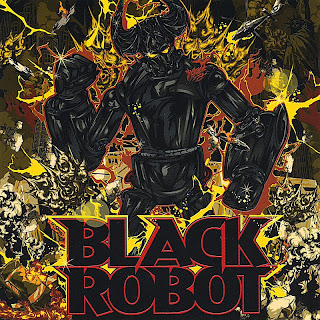 What happens when three three former members of Buckcherry reunite? They transform into a new powerhouse rock band in the form of Black Robot!Black Robot are influenced by classic hard rock legends like AC/DC and Aeromsith, while creating something new with their own distinctive sound.The band are driven by the vocals of Detroit native Huck Johns. If you haven’t heard Johns sing before, you are in for a treat. Producer Dave Cobb really pushes Johns to new heights on this cd and brings out some of Hucks best performances! But Black Robot are'nt all about the vocals, the rest of band featuring Yogi Lonich on guitars, Jonathan Brightman on bass and Devon Glenn on drums play their asses off on this CD. I am pleasantly surprised on how different this material is from their past musicwith Buckcherry.You have the stadium anthem “Baddass”, and the cover of J.J. Cale’s “Cocaine” which are sure to pull you in upon first listen.“Momma Don’t Cry” has an awesome Jimi Hendrix like vibe to it, whilst “I’m In Love” slows down the pace with an a very cool ballad. This song could be a huge hit for the band if they get the right breaks and some god darn airplay! “Money” is an infectious upbeat tune, “In My Car” has a good, classic 70’s rock vibe to it reminding me of early Areosmith, and “Love On A .45″ sees Johns channeling his inner Zeppelin on this catchy tune!
This is a great album with Black Robot proving once again the Rock is far from dead!!