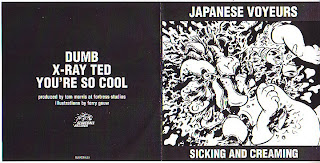 London based 5 peice Japanese Voyeurs offer up their Sicking & creaming EP, "a bunch of old demo's which the band were told they should release by an Yaqui Indian Shaman, who came to them in a dream....."
Sicking and Creaming’ EP is as honest and raw an introduction to a band as your likely to find today.
You’re So Cool’ and ‘X-Ray Ted’ are great rock ‘n’ roll tunes with big riffs and great groove but it’s the stand out track ‘Dumb’ that marks these guys out as ones to watch for the future,
.Fronted by the charismatic Romily Alice whom has a very unique voice, the band display have a raw energy that just blasts its way through each song.