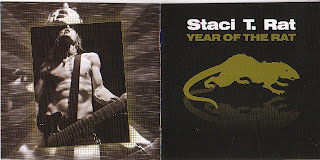 Staci T. Rat is no stranger to the music scene, coming from the high pedigree that was the Red Light Rippers and more recently Chop Suicide.
This time the Canadian sleazster returns with a new Ep, which contains four excellent examples of his song writing genius.
Year of the Rat is a great dose of Punk/Rock/Pop/Glam/Sleaze, which even contains a beautiful acoustic ballad, 'Another Time' just to break up the pace a lil.
The one strange thing about this Ep is the production. It is woefully under produced, but the pure quality of the songs and musicianship really shines through, and oddly enough the lack of production tends to lend itself to these songs!
I really do think that Staci has found the right home on British independent label Trashpit Records and they will provide the right back ground for the next step up the ladder to super stardom!